"It's not the sex I've had, it's the sex I want that you can smell" 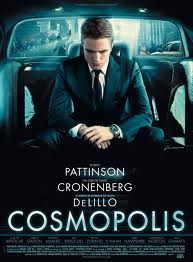 Young billionaire Eric Packer (Robert Pattinson) decides to take his stretch limo across for a haircut. Along the way he conducts business, meets friends, family and acquaintances before being mobbed by anarchists and confronting someone who has malicious intent to harm him.


This film reminded me of a good Shakespearean play; I only understood about half of it but enjoyed it a lot. There are long elongated stretches of duelling dialogue which are spoken in a half alien language of metaphors and double meanings. The word ‘this’ takes on new meanings and is used in – it feels like – almost every sentence. Much like a Shakespearean play there are odd comic moments and in keeping with Director David Cronenberg’s cannon, brief scenes of extreme violence. These few instances ignited some of the more drawn out and dare I say duller scenes to keep the audience on tenterhooks. Despite these flashes this wont be a film for everyone and a man next to me in an early afternoon screening fell asleep while a couple on the row in front left about half way in. 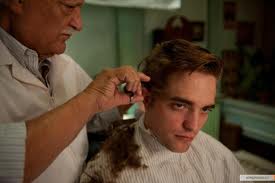 Robert Patz’ character reminded me a little of Michael Fassbender’s in Shame. Both felt like they were on a path to destruction which they both sort of wanted or at least drew themselves towards. R-Pattinson defies the advice of his security to actively search out trouble and seems to show no emotion in doing so. In fact there is very little emotion in any scene and the whole cast seem to live in a world of robots. Sarah Gadon plays Robbie-P’s wife as an android with almost no movement or signs of feeling. Equally The Robster’s bodyguard played by Kevin Durand is focussed solely on his employer’s safety and shows no signs of living in a world outside of the film. This and also the cinematography lead me to wonder if the film was set inside a dream. It certainly had a dreamlike quality to it. Pattinson is surprisingly excellent in this film, playing a character that is sealed off from the outside world in such a way that he barely notices when it is crumbling in front of him. He has stoicism and magnetism that is rarely matched on film. 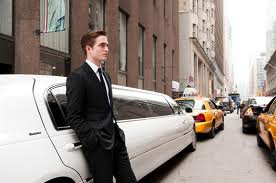 As I said a couple of paragraphs ago I didn’t understand a lot of what was actually going on. There is a lot of financial talk and discussions on a metaphysical level which went over my head. None of this stopped me enjoying myself though and I only felt bored once, in a long scene featuring Rob-Patz and Paul Giamatti. The scene was livened up though by a wonderful creeping score which slowing increased in volume as the tension racked up as well as a short sharp burst of violence.


This film definitely won’t be for everyone but I do hope hordes of young Twilight fans go and get bitterly disappointed and confused. Personally I thought it was very good but felt perplexed at times. Unlike the source novel the ending is slightly ambiguous which I felt was a good thing. This is a film I’d recommend to hardcore Cronenberg fans and anyone who doesn’t mind having to think a little but if you’re only interested in Rizzle-Patz cos’ he’s super hunky then stay away.