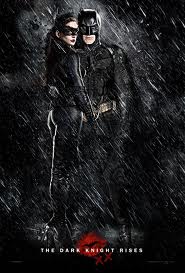 The final part of Christopher Nolan’s Batman trilogy finds Bruce Wayne (Christian Bale) broken, physically and mentally, eight years on from the events of The Dark Knight. has become a recluse, staying away from the limelight both as a Billionaire playboy and masked vigilante. is temped out of retirement though through a combination of curiosity about a wily cat burglar called Selina Kyle (Anne Hathaway) and the threat of a powerful anarchist named Bane (Tom Hardy).


I’ve never been as much of a fan of Nolan’s Batman films as some people although I did like Batman Begins and really enjoyed The Dark Knight. Going in I’d avoided all spoilers and reviews but expected that I would enjoy the film. I was wrong though. I didn’t just enjoy it but thought it was one of the best, if not the best film I’ve seen so far this year. Nothing prepared me for just how good this film is. 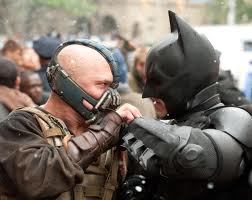 There are three main reasons for my total enjoyment. The first is the cast and acting. The cast is littered with terrific actors giving fantastic performances. Although this is a Batman film, Bruce Wayne/Batman isn’t really the central character. Instead this is an ensemble with Joseph Gordon-Levitt’s Blake sharing as much screen time as Bale, if not more. Along side those two are Tom Hardy, Anne Hathaway, Marion Cotillard, Gary Oldman, Michael Caine and Morgan Freeman who together make up the principle cast. Christian Bale is superb as both Wayne and the Batman as he has been in both previous films. Having been overshadowed by Heath Ledger in The Dark Knight it’s easy to forget just how good he is in this series. Here he plays a broken Wayne who must find new strength and plays the part beautifully. His Batman is as before, gritty, stern and dark. Gordon-Levitt is excellent as Police Officer Blake. He is at the centre of the story throughout and is the human face to the piece. His character is of great interest and you always have the feeling that there is something else there but could it be the film leading you down a dead end path? Anne Hathaway makes a great Catwoman although she is never referred to as that in the film or credits. She has an intensity which leads us to believe that there is something under her hard exterior and she knows how to manipulate people. She also looks really hot in the skin tight black suit. Hathaway has never been an actress who I’ve found particularly attractive but in this – meow! Michael Caine delivers quite an emotionally charged performance and Morgan Freeman is good but his character doesn’t have a lot to do. Marion Cotillard is fantastic, especially later on and Gary Oldman is, as usual first-class. He always seems to be on his way out but has a determination which keeps him going. As well as the principle cast, actors such as (Killer Joe Joe), Liam Neeson, Cillian Murphy, Nestor Carbonell, Matthew Modine, Aidan Gillen (The Wire, Game of Thrones), Tom Conti and Burn Gorman all lend their talents and no one lets the side down. 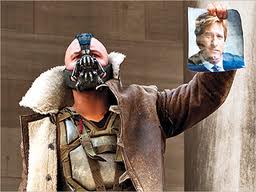 Despite all of the great actors mentioned above, the star of the film is Tom Hardy’s Bane. Hardy delivers a mind blowing performance as the terrorist-anarchist villain. I truly believe that Hardy’s Bane is one of the greatest screen villains I’ve ever seen. Hardy is almost unrecognizable underneath a mountain of muscle and a mask which covers over half his face. The mask means that a lot of his acting must come from elsewhere on his body and his posture and body language as well as expressive eyes tell so much. There has been a lot of discussion about Bane’s voice and while I struggled to understand the odd word it was worth it for the power and terror which struck me when Hardy spoke. Accent wise he reminded me of Jeffrey from The Fresh Prince of Bel Air but his forcefulness as well as the splendidly crafted lines he spoke sounded brilliant. Bane is a terrifying adversary who holds his own against Batman physically and mentally. Hardy had big shoes to fill following on from Heath Ledger’s Joker but while not being as fun to watch he is much more frightening and a more realistic villain. You get the feeling when watching him that Batman and the whole city are in trouble. 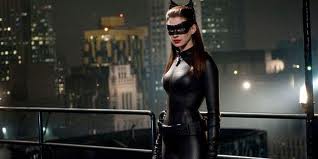 The second great thing about the film is the script. The story is excellent and contains some wonderful set pieces, surprising twists and cracking dialogue. Being the end of a trilogy you never know whether the hero will make it through or not and there has been speculation as to whether or not Batman will survive. I won’t give it away but will say that the series ends in a breathtaking and satisfying way. The back story given to the various new characters helped to place them in the world and while there were lots of them I never felt there were too many. The plot takes place ostensibly in Gotham () but there is also a brief visit to the beautiful Indian city of . There has been talk in the that the film has politics behind it and it has even been accused as being an attack on Presidential Candidate Mitt Romney. I didn’t see it as that but there is definitely politics close to its surface. Bane, a poor orphan rises up to take back for the people. He attacks the stock exchange and goes up against a Billionaire in Bruce Wayne. In one scene rich people of what look to be the are thrown from their homes while anarchists ransack their possessions, taking back what they, the proletariat think is theirs. Bane’s central message is about sharing the wealth and viewers in the will undoubtedly be reminded of last summer’s riots while watching Bane take over the city. The film builds to a crescendo and produces an ending worthy of the rest of the movie. People dying for a wee after 165 minutes will be pleased to read that there is no post credits scene in the version. The huge fight towards the end will stink in people’s memory but for me the Batman-Bane fight halfway through while Catwoman looks on was the much more powerful of the two.


The third aspect of the film which I loved was Hans Zimmer’s incredible score. At times the music shakes you to your core as it thumps through you but at other times it is soft and almost forgotten in the background. At times there is no score and this really helps to give power to the dialogue even more than if it had music underneath it. One slightly unfortunate aspect of the otherwise excellent score is that one of the pieces that runs through the entire film sounded just like the string accompaniment to Plan B’s song Ill Manors. If you’ve seen the film, listen to this and see if you agree. That song actually goes quite well with the plot of the film too.


The Dark Knight Rises really knocked me for six as I didn’t expect to like is as much as I did. The various plot lines were interesting and intersected well while the characters were well written and wonderfully acted. There are surprises and twists which I’d love to discuss but don’t want to give away but they will answer a lot of the questions and guesses that people have had. This isn’t a film that will stay with me for a long time but as far as enjoyment throughout its runtime I can’t think of another film I’ve enjoyed this year as much as this.