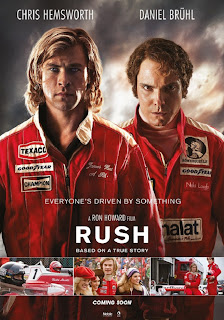 Rush, the latest offering from director Ron Howard, is an exhilarating and dramatic biographical action movie set in the glamorous world of the 1970s Formula One driver. Being a fairly faithful retelling of true events, the movie focuses on the careers of and rivalry between Austria’s Nikki Laura (Daniel Bruhl) and Britain’s James Hunt (Chris Hemsworth) in the mid 1970s during which the pair were the cream of the motor racing world. Though the movie begins in 1970, the main thrux of the plot is the 1976 F1 season during which the pair’s rivalry and willingness to put themselves in the path of danger reached an all time high before the season reached a dramatic climax in Japan.

I need to mention very early on that personally I’m a huge fan of Formula One and have only missed around three races since my first in 1994. I love the history, the strategy and the technology of the sport and would rank it amongst my biggest passions. Because of this I was worried that my judgement of the film would be clouded but I’m confident that the film is good enough that my love of its backdrop hasn’t affected my enjoyment. In many ways the movie reminded me of the sublime BAFTA award winning documentary Senna in that although both movies are about F1 and F1 drivers, they could be about anything. It’s the story and characters who make both films great. They could be set within any discipline.
Read the rest...
Posted by Unknown at 19:16 5 comments:

I stopped reviewing every film I watch towards the end of July and have gone from 30+ to (last month) four reviews a month. While I haven't really missed writing about the movies I've seen, I wanted to make sure I at least wrote something about every single one so that I could keep some sort of fluidity in my blog. So here are my very brief opinions of the films I've seen since I stopped reviewing everything.

Rebel Without a Cause


Better than the average slasher. Interesting. Far too grizzly for me. 5/10


A cross between French New Wave and Woody Allen. Annoying at first but I warmed to it. It made me want to live the BoHo life. 7/10 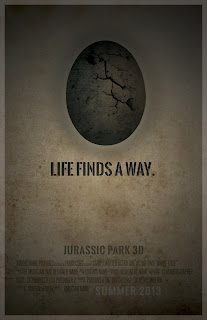 The fact that Jurassic Park is twenty years old makes me feel older than I’d like to think I am. It’s hard to believe that it was two decades ago that a wide eyed seven year old me took a trip to the local cinema for what was only my second cinematic experience at the time. The film was a sensation with children, adults and critics and became the highest grossing movie of all time. Although I loved the film, there was a part of me who secretly hated it as it opened children’s eyes to the dinosaur world, something which I naively thought only I liked. Suddenly all my friends had dinosaur toys too and it annoyed me that they’d stolen my thing. It was the equivalent of that cool, underground band you like appearing on TV and going mainstream. Despite my anger over the film taking dinosaurs mainstream, it was pretty much the best thing my seven year old eyes had ever seen.

Twenty years, two sequels and about a dozen viewings later I heard that Universal were bringing Jurassic Park back to the big screen in 3D. Part of that sentence made me very happy but I was rather sceptical about the ‘3D’ element. I was even offered the chance to join a critics screening in New York City of all places, six months ago while on holiday there. I was unfortunately unable to make it though as I’d left my girlfriend shopping somewhere and knowing that she never notices her phone ringing and wouldn’t be able to make it to the theatre in time anyway, I had to decline, something which was deeply disappointing. All was not lost though as although I had to wait nearly half a year, I was eventually able to see the film on one of the largest screens in the country, the IMAX screen in Manchester.
Read the rest...
Posted by Unknown at 11:55 2 comments: