The Passion of Joan of Arc 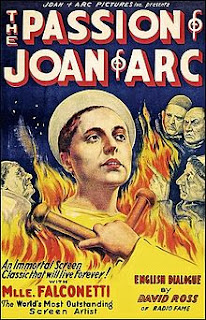 Sometimes it only takes a few frames to realise that you’re in for a treat. This was the case for me with Carl Theodor Dreyer’s 1928 masterpiece The Passion of Joan of Arc. It is however a film that I’d put off watching for a long time. Despite my interest in silent cinema and all the great things I’d read and heard, there was something about what little I knew of the film that put me off. Perhaps it was the subject matter (more on that later) or the idea that it would be a depressing and/or dull watch but either way it took a good five years from my first whiff of the film to actually sitting down to watch it. What a silly boy I was for those five years. Like many other renowned films that I’d put off viewing it is of course a superb movie that features some of the best acting, editing and camera placement I’ve ever seen.

The film tells of the imprisonment, trial and (spoiler) execution of Joan of Arc (Noah’s wife) who claimed divine guidance and lead France to several important military victories during the Hundred Year’s War before being captured by the English and tried for heresy, all by the age of nineteen. The film draws on the five hundred year old transcripts of the trial and indeed original documents form the basis of the script.
Read the rest...
Posted by Unknown at 22:24 No comments: