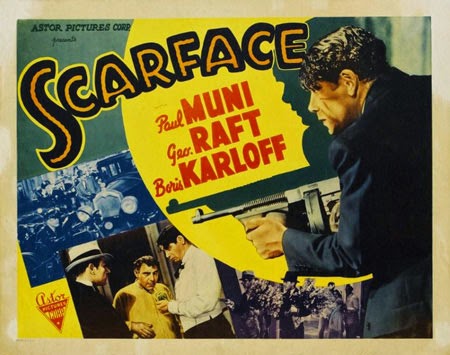 Based on a 1929 novel and inspired by real events, 1932’s Scarface was one of a series of pre-code gangster pictures which shocked and enthralled its viewers. Opening with a written disclaimer, damming the government for their lack of action regarding the threat that modern gangsters pose, the film nonetheless glamorises the life of crime while shaking a stick in its vague direction. It follows the ascent of young arrogant Italian immigrant Tony Camonte (Paul Muni) as he rises through the Chicago underworld by bumping off bosses and rivals who stand in his way and intimidating speakeasy proprietors into taking his booze. Aided by his right hand man, the quiet coin flicking Guino Rinaldo (George Raft), Tony reaches the heights of underworld overlord but finds that being at the top is even more dangerous than the climb to the summit.

Arriving two years before the Hays Office began imposing much stricter censorship on Hollywood; Scarface was able to get away with a lot more than many films which followed it. Inside its ninety minutes you’ll find brutal murders, gunplay and revealing costumes worn by the female characters, things which just wouldn’t be permissible from 1934 onwards. Even still, the film troubled the censors and the ending was changed to suit their tastes. Overall the movie contains a ‘crime doesn’t pay’ theme, something which you expect from the opening credits disclaimer but it’s slow in coming. For the most part, the theme appears to be ‘crime gets you everything you want’ and it’s this which the censors must have taken issue with. The glorification of the central character is also something which the Hays Office was unhappy with. This is something which film makers and censors would lock horns over for the next forty years.
Read the rest...
Posted by Unknown at 09:32 5 comments:

Out of the Past 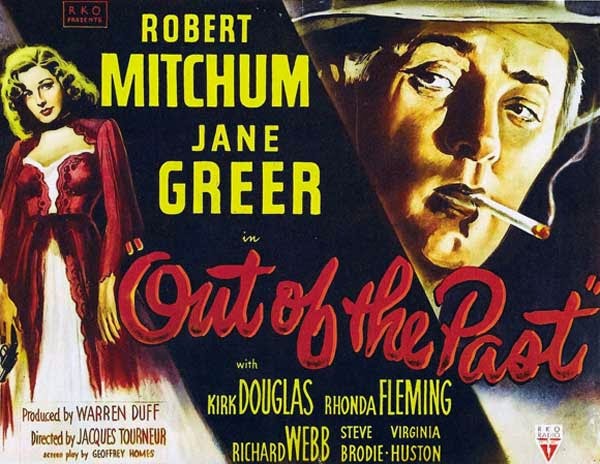 1947’s Out of the Past is widely considered to be one of the greatest examples of 1940s film noir. Set around a convoluted plot, the film twists and turns through double, triple and quadruple crosses, landing surprise blows on its dumbstruck and occasionally confused audience. Based on the novel Build My Gallows High and originally released in the UK under the same title, the picture stars Robert Mitchum as freelance Private Detective Jeff Bailey. He’s hired by rich and shady businessman Whit Sterling (Kirk Douglas) to track down a dame, Kathie Moffat (Jane Greer) who Stirling alleges has disappeared with $40,000 of his money. Told partly in flashback and with a voiceover to match that of Sunset Boulevard’s, the film twists and turns like a twisty-turny thing, through several cities, two nations and a long, albeit undisclosed, period of time.

It took me a little while to get into Out of the Past but when I did, I enjoyed it greatly. Unfortunately my patience wore off towards the end thanks to the elaborate nature of the narrative. This isn’t a film I’d suggest watching after a long day at the office and a couple of martinis inside your stomach. Although a large part of the movie’s charm is its strong story, the frequent double crossing did begin to confuse me as we crossed the hour mark. This isn’t entirely a bad thing however as half the fun is in guessing who has the upper hand and who will strike next.
Read the rest...
Posted by Unknown at 22:26 7 comments: 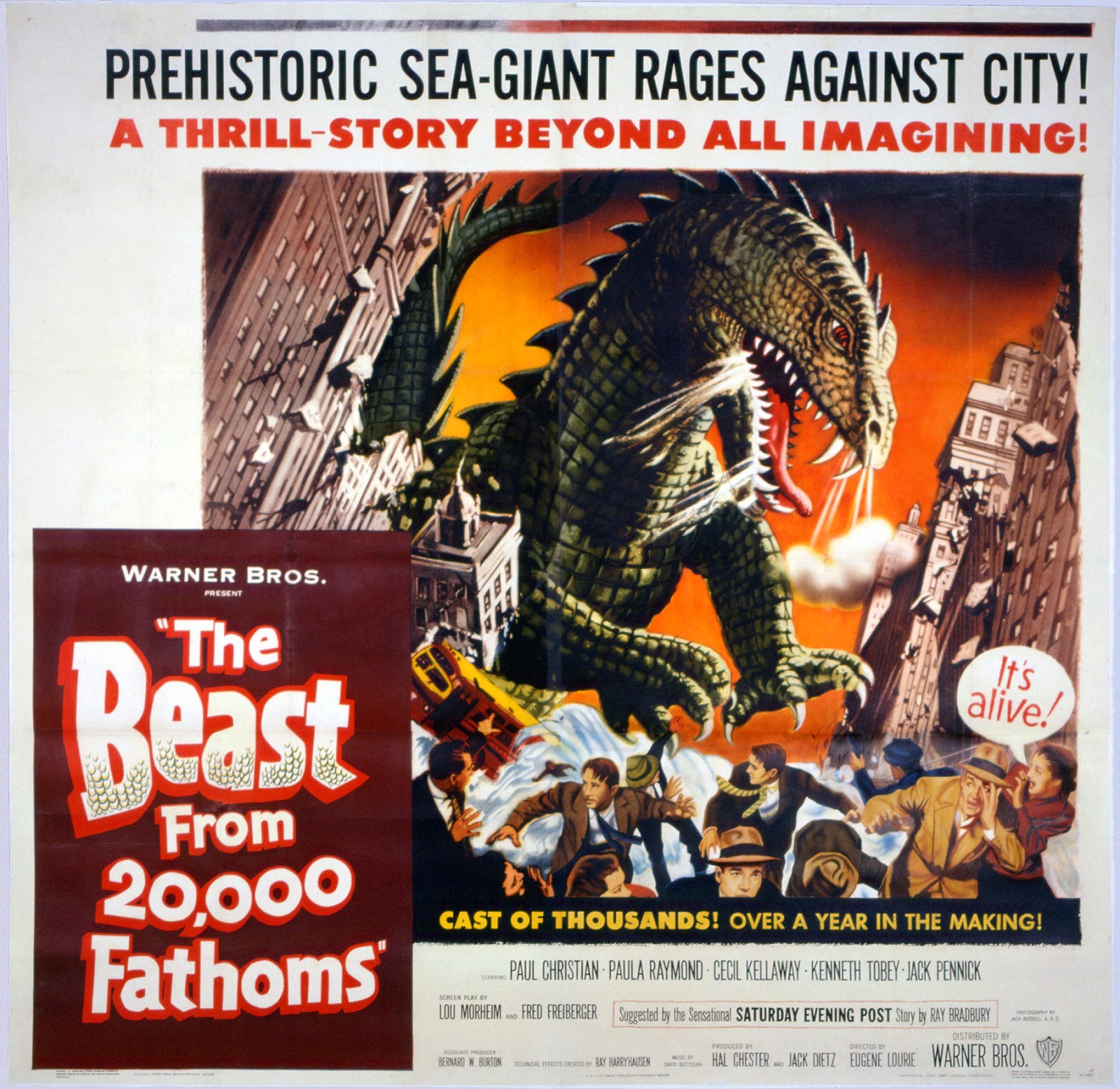 Predating the more famous Godzilla by a year and being a major influence on that movie, The Beast from 20,000 Fathoms is a 1953 creature feature that is home to a series of firsts. It was the first movie in history to feature a monster awakened by a nuclear blast and also contains Ray Harryhausen’s first solo special effects work. It spawned a plethora of imitations and ushered the dawn of a golden age for monster movies.

The plot sets a pattern which will sound familiar to anyone who’s seen a creature feature before. Deep inside the Arctic Circle, a team of scientists and military personnel are carrying out a nuclear test. While out collecting samples soon after, physicist Thomas Nesbitt (Paul Christian) is shocked to eye a giant beast, lurking in the icy gloom. Back in New York City no one believes the young scientist but when strange tales come down the Atlantic seaboard towards Gotham, others begin to treat Nesbitt’s claims seriously. Unfortunately they’re too late and the beast makes devastating landfall in the city itself.
Read the rest...
Posted by Unknown at 22:03 1 comment: 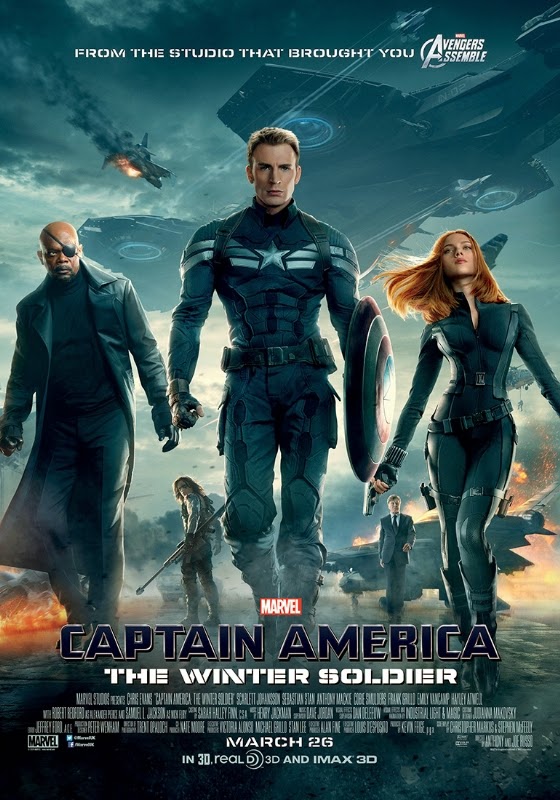 Captain America (Chris Evans) returns in his second solo outing to sniff out the rotten core at the heart of S.H.I.E.L.D. When an attempt is made on the life of a senior S.H.I.E.L.D executive, Captain Steve Rodgers finds himself on the outside of a conspiracy and on the run. With the help of Black Widow (Scarlett Johansson) and newcomer to the series, Falcon (Anthony Mackie), Cap’ must hunt down those who have sworn to protect and comes across a figure from his past in the process.

When the first Captain America movie came out in 2011, I expected it to be the Marvel film that I’d enjoy most. I’m a lover of history and am fascinated by the 1940s, especially the Second World War. It was surprising then that I enjoyed it far less than any other of the Marvel films to that date. I’m glad to say that Winter Soldier is an improvement on the original but still lags some way behind the likes of Thor and Iron Man for me.

I’ll start with what I enjoyed about the movie as that will take less time. I think that the themes are strong and well realised. By turning S.H.I.E.L.D, or at least elements of it, into the bad guys, the film holds a mirror up to the intelligence community. After years of reports about NSA bugs, CIA phone tapping and MI5 interference, the writers pick up a strong idea and run with it. By putting those who are meant to protect us under the spotlight, we get a glimpse into a shady and easily corruptible world. The positioning of S.H.I.E.L.D’s headquarters, high above the Washington skyline, is also a strong visual metaphor. The movie asks us, who is really in charge? What are their powers and if they’re watching us, who’s watching them?
Read the rest...
Posted by Unknown at 13:07 1 comment: