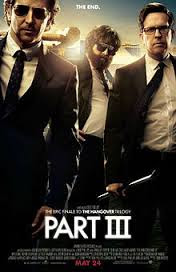 I seem to be different to everyone else. Not just different like we’re all different but different, different. I don’t think that Peter Kay saying the words ‘garlic’ and ‘bread’ in close proximity is remotely funny yet he has sold more than ten million DVDs in the UK. The phrase ‘Am I bovered’ no matter how cockney’ed up also fails to draw a smile. When The Hangover was released in 2009 I didn’t see it in the cinema but months later I gave into the pressure of everyone telling me it was the best comedy since sliced film and I watched it at home with my girlfriend. I thought it was dreadful. About a year later we ventured to the cinema to see Part II with a large audience. This time it was even worse. I thought it was offensive and not at all funny but was surrounded on all sides by people having the time of their lives. It was with great trepidation then, and immediate regret, that I took a few hours on my day off to see The Hangover Part III and d’you know what? I think it’s the best of the series.

I use the phrase ‘best’ in the same way as one might describe Albert Speer as the best Nazi. Sure he was a Nazi but didn’t he design some lovely buildings? What I’m getting at is that The Hangover Part III is the best of a bad bunch. Once again I might find myself in the minority here and I’m sure the cinemas will be packed for weeks with guffawing humans, rocking back and forth in their seats and looking at each other with mutual recognition that they are part of a group. The third (and hopefully final) instalment of The Hangover series is neither as offensive nor as formulaic as the second film and about as funny as the first. I laughed once and smiled about four or five times. 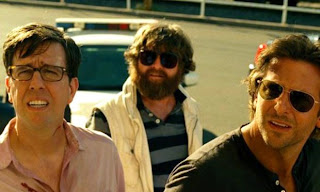 Much of the opening five minutes will be familiar to you if you’ve seen the trailer. In this respect at least, the film does something good. Generally comedy trailers take all the big laughs from a film and squeeze them into one two minute trailer which makes the movie look like Citizen Kane covered in sugar. The film’s trailer at least attempts to leave some surprises for the actual film, even if those surprises are about as surprising as seeing a car on a road. The incredibly convoluted plot involves the ‘Wolfpack’ (Kill me. Kill me now) driving across hundreds of miles of desert because they are taking Allen (Zach Galifianakis) to some sort of retreat to help him with his obvious psychiatric problems. The foursome are jumped by gangsters headed up by Marshall (John Goodman) who orders the four guys to track down Part II’s baddie Mr Chow (Ken Jeong) who is responsible for stealing Marshall’s gold.

International gangster Marshall can’t find Mr Chow so he orders four hopeless losers to do it for him. That’s the level we’re at here. Luckily though, as collateral, Marshall takes the least interesting of the foursome with him in a repeat of the previous films. The plot then unravels like a particularly knotted ball of wool, following the men as they track down Chow across the South Western US and Mexico. The writers obviously took a lot from the second film and realised that they couldn’t get away with simply rehashing the same formula for a third time so give Mr Chow, who I believe was a popular character, much more screen time in this film. Allen, the obvious draw of the franchise also holds much of the focus and provides all of the laugh(s). The other two, Ed Helms and Bradley Cooper are generally used to bounce off and in the most part react rather than act. 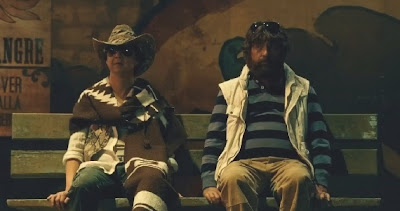 There are several problems with the plot which need to be bought up at this point. The first problem is one I’ve already touched upon. A gangster would never get these men to track down an international criminal who has stolen his gold. I can let that go because after all, this is a comedy so the rules of what is and isn’t acceptable tend to get a little blurred. A huge error occurs in a break-in sequence in which Chow persuades the other three to help him steal the gold from his old house. Having knocked through a brick wall with a sledgehammer, they are then locked in a room, held against their will by an almighty, impregnable little wooden door. While they bang against the door and shout as loud as their lungs will allow, they all seem to forget that they have s sledgehammer beside them. In a later scene they also kick open a locked door which is twice as large. Once they lose Chow, Marshall re-enters the picture to tell them off. Instead of ending their lives and thankfully the franchise for good, he decides instead to give them a limo to try again. The whole thing is preposterous beyond belief. You’d think preposterous in a comedy would be a good thing but if the audience isn’t laughing then it just looks lame.

On a plus note, the cinematography isn’t bad at all and the film looks very good. There are some nice camera angles and design choices and it also doesn’t last too long. Zach Galifianakis is the best thing about the film and the series as a whole and has tailored the character perfectly to himself. I don’t know how much of his dialogue is scripted but the way he presents it, it feels very much off the cuff. It’s a shame though that what he says is rarely amusing. Ed Helms is given very little to do in this film and after a couple of films which made me think I might be wrong about him, Bradley Cooper is firmly back in familiar territory again. Ken Jeong is meant to be playing a hilarious character but is offensive and distasteful from start to finish. A major problem with the film as a whole is the amount of unnecessary animal death. At least three species are killed for laughs in various, detestable ways. I don’t understand what part of decapitating a giraffe or smothering a bird is meant to be funny, maybe it’s the bit when they take their final breath or perhaps it’s all the blood? Either way I didn’t like it at all. What’s worse is that the movie wasn’t brave enough to show one of the animal deaths for pet related reasons. It’s a massive cop out.

In the end then I think The Hangover Part III is a terrible film but what do I know. I’m sure it will make hundreds of millions of dollars and will be being typed into the ‘favourite movies’ column of thousands of Facebook profiles alongside its predecessors and various Adam Sandler and Jennifer Anniston vehicles. If you like films full of plot holes in which animals die or like laughing at people because they’re Chinese or have mental disabilities then this is the film for you.