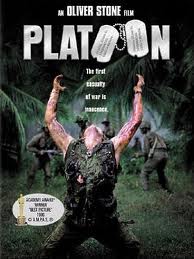 Platoon takes us through a tour of the Vietnam War through the eyes of the fresh and idealistic young volunteer Chris Taylor (Charlie Sheen). We follow Taylor from his first day in Nam to his final battle accompanied by voice-over which expresses his thoughts, worries and ideas. The film appears to accurately portray the day-to-day life of a soldier in the jungle and promotes the views of the monotonous nature of infantry warfare which is punctuated by moments of extreme violence. Platoon creates an environment for its cast whereby the characters fear not only the Vietcong and jungle but also each other as tensions and rivalries run high and suspicion spreads like wildfire. Personally I think it is one of the finest war movies ever made and it went on to win four Oscars including Best Director and Best Picture at the 59th Academy Awards.

Staring a young, pre breakdown Charlie Sheen the film also features a large cast of terrific actors who pretty much without exception deliver excellent performances. Willem Defoe plays a Sergeant who is in the midst of a fierce rivalry with fellow Platoon leader Tom Berenger. The two create much of the tension and rivalry which permeates the movie. Among their squad members are the likes of Forrest Whitaker, Francesco Quinn, John C. McGinley, Kevin Dillon, Keith David and a fresh faced Johnny Depp still four years away from his breakout roles in Edward Scissorhands and Cry Baby. The actors were sent on a boot camp in the Philippines by Writer/Director Oliver Stone in order to prepare them for the ordeal of filming in the jungle. Stone wrote the outline of what eventually became the script after he himself came back from serving in Vietnam and many of the characters and battles are based on what he experienced himself. 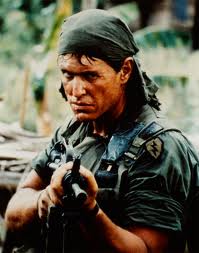 What I like about the film, besides the tension and horrific battles is its politics. The film openly questions America’s role in Vietnam and also tackles racial politics as well as the fact that most of the soldiers fighting are at the bottom of society, the down and outs, the have not’s who fight and die for the haves. The film accomplishes this thanks largely to its well drawn characters and the arc of central character Chris Taylor who grows from an idealistic recruit into a mean, take no nonsense killing machine. Another great thing about Platoon is its and its characters moral ambiguity. As Westerners and Capitalists we are imprinted from birth with the ideas that we are the good guys but witnessing some of the actions taken by the characters and the US during the film leads us to rightly question this assessment and come to the conclusion that the line between right and wrong during this type of conflict is incredibly thin and fuzzy.

The soundtrack is another aspect of the film which impresses and the overture Adagio For Strings by Samuel Barber is perhaps one of the most widely recognisable pieces of classical music thanks to it’s appearance in the film. Rock and Pop music from the period also appears with White Rabbit by Jefferson Airplane being a particular favourite of mine. The soundtrack is really superb overall and also features the likes of Otis Redding, Smokey Robinson and the Miracles and The Rascals.

Overall Platoon is a fantastically complex and realistic depiction of the Vietnam War and throws up a lot of uncomfortable ideas as well as being entertaining. The cinematography is beautiful and the acting wonderful. It’s up there with the best war films ever made.