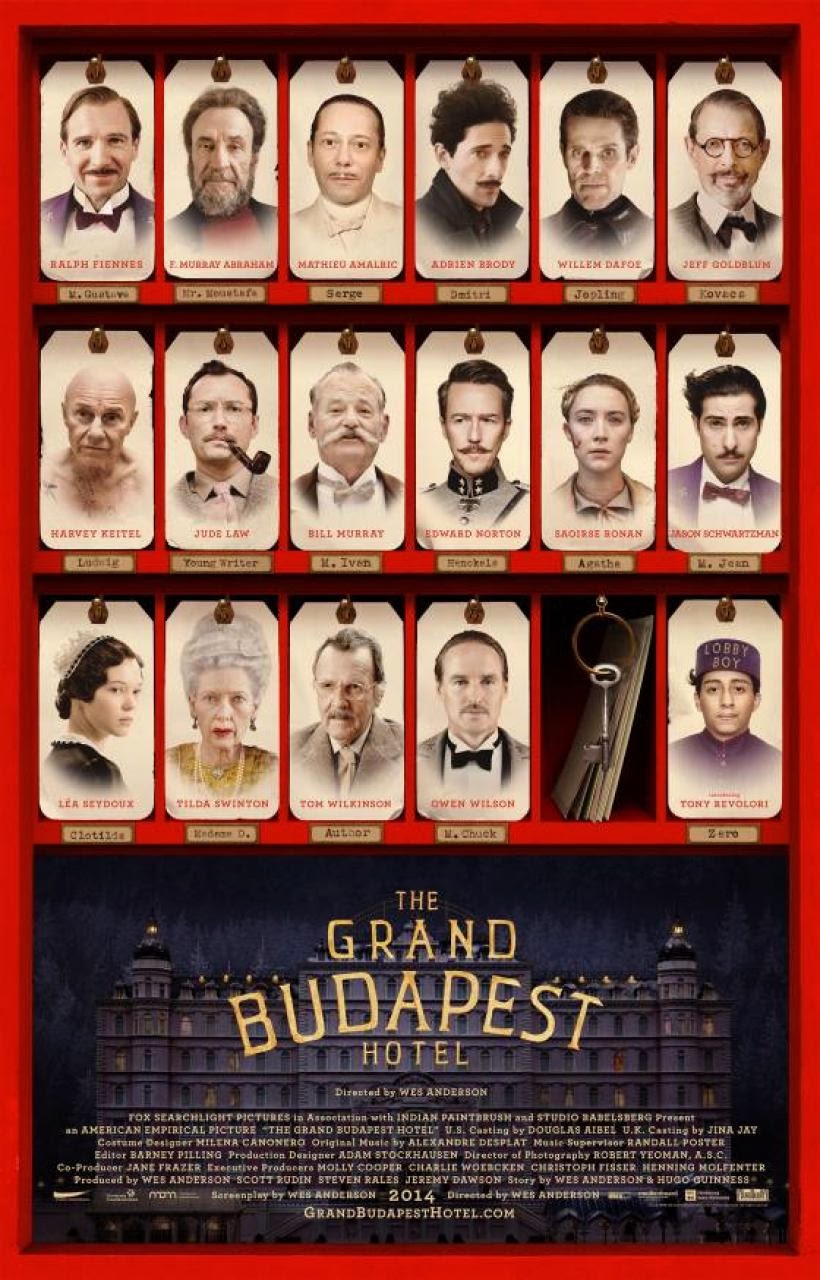 The latest picture from auteur director Wes Anderson is in my opinion, his finest to date. A typically lavish and exquisitely designed movie, it stars Ralph Fiennes as M. Gustav H, a respected concierge at The Grand Budapest Hotel. Pitched as a sort of cross between a Palatial residence and the hotel from The Shining, The Grand Budapest is seen in all its splendour during the majority of the film. The movie opens however around thirty years after the events to be depicted in, at a time during which the grand old hotel is but a shadow of its former self. The action is depicted in flashback, from the memories of Zero Moustafa (Tony Revolori), a once Lobby Boy and apprentice to the aforementioned Gustav H.

In 1932, Gustav H. is seeing off one of his many elder lady friends, a rich widow by the name of Madame D. (Tilda Swinton). Gustav’s charms have lead to an on off affair which has lasted for many years and she is upset to be leaving the hotel over which he holds sway. Days later the woman is dead. Gustav H. rushes to her Estate in the hope that his romantic efforts have written himself in the will and sure enough discovers that they have. The deceased’s son (Adrien Brody) is outraged at the reading of the will and accuses the concierge of murder. Gustav H. is soon on the run and ends up under lock and key inside an intimidating maximum security jail.


There are generally two schools of thought when it comes to the films of Wes Anderson. Many people, like myself, find them the height of cinematic art, fine crafted by a director with a single and often beautiful vision. Some understandably find him over the top, guilty creating over indulgent and impregnable films which punish the casual viewer. This film is unlikely to alter anyone’s opinion but rather entrench people in their chosen camp. Personally I think it’s masterful. The film is so wonderfully designed with impeccable attention to detail that every frame could be stared at for hours. Occasionally the camera lingers and one is allowed to appreciate the way in which books are stacked or candles are arranged but these can distract the viewer from the foreground action. Nevertheless they create the desire for multiple viewings. 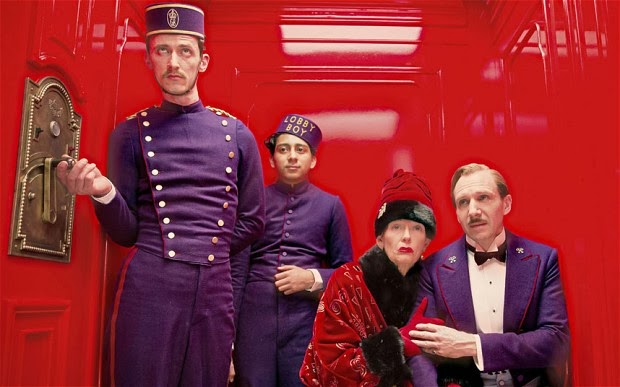 Anderson makes ample use of his trademark filming techniques, using many tracking and panning shots. His scenes are often arranged to be viewed from a singular perfective and it’s rare for the camera to approach the set from a diagonal, raised or lowered angle. The camera is face on in much the same way as the very first motion pictures. The tracking shot is used to allow motion through the lavish sets, often moving at an unusually and unsettling quirky pace. Beside these are ninety degree panning shots which always come to a stop with pin point precision. At times the film takes the form of a well built clockwork toy, moving as pre programmed without an inch of room for error. The movie also reminded me of Georgian architecture, framed in perfect symmetry. It is rare for the left side of the screen to be different from the right. This all creates a sense of perfect placement and I found a smile broadly perched upon my face on many occasions as the camera swung around to land yet another perfect pirouette.

The sets are sumptuous and decadent and the exterior shooting perfectly recreates the look and ambiance of a central European town. I was very much reminded of Bratislava while traversing the cobbled streets and passageways away from the hotel. Much of the film was shot in Saxony, Germany and the language as well as history resonates with that location. Amongst the murder plot are shades of the rumblings before the Second World War. Filmed largely in Academy Ratio (4:3), the movie displays a longing respect for the era of its setting. This is contrast with 1.85:1 in the scenes set later in time. The accompanying score works nicely to create a sense of urgency and features thick double bass with lashings of muted, brushed drums. I found myself tapping my feet to the music as I laughed with delight at the script. Speaking of the script, it’s furnished with fantastically poetic idiom and a hilarious smattering of gutter language. Gustav H. has a great turn of phrase, evoking the language of an era now lost. He speaks like a cross between a Romance era poet and Golden Age movie star and it slips easily off the tongue of a man who seems born to play the role. 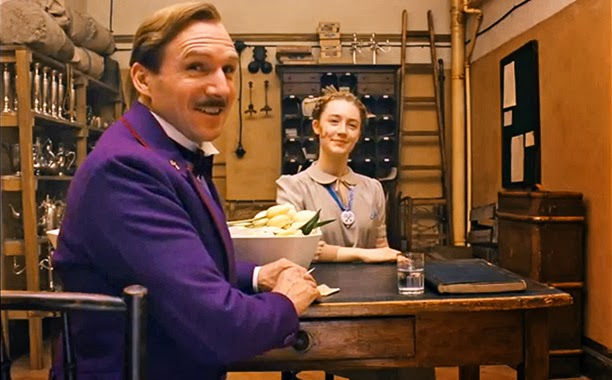 Ralph Fiennes is magnificent in the lead role. It’s not far from a career best performance from the esteemed actor. The character was written for him by Anderson and it shows. He seems to have a lot of fun and it translates through the screen. He’s supported by a number of stars, all seemingly desperate to appear in a Wes Anderson movie. Alongside Anderson regulars such as Bill Murray, Jason Schwartzman, Adrien Brody and Owen Wilson are numerous top actors who feature in a variety of roles, often behind exquisite moustaches. Willem Dafoe gives a good turn as a vicious and dastardly employee of Brody’s Dmitri. Jeff Goldblum is wonderfully Goldblum-esque in the role of lawyer and executor of Madame. D’s estate. Tilda Swinton is neigh on unrecognisable under a mountain of makeup and plays the aging lady with aplomb. Harvey Keitel pops up as a heavily tattooed inmate. It’s always great to see him on screen. Jude Law is also impressive in the role of a young writer. Edward Norton is on hand, hot off a great performance in Moonrise Kingdom, as a Police Inspector while Saoirse Ronan excels as a love interest of Zero Moustafa.

Moustafa is played by newcomer Tony Revolori (so new in fact that the actor doesn’t even have a Wikipedia page at time of writing). Revolori holds his own against his esteemed colleagues and appears to be a real find. He shares great chemistry with Fiennes in his protégée role. In summary, I’m finding it difficult to think of a single aspect of this movie which I didn’t enjoy. I searched for one in post viewing discussions with my girlfriend but much like me, she was at a loss. It might not be as funny as Anderson’s best and the plot might not be as sharp as he’s capable but overall, when all facets are combined, I’m sure this is his best movie so far.