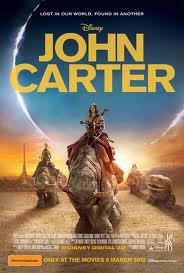 Civil War veteran John Carter (Taylor Kitch) is on the run from the law and takes shelter inside a cave in which he discovers gold. Before he can mine it however a man appears as if from nowhere and attacks him. Carter kills the man and repeats his dying words. Suddenly he is transported to a strange world where he has the ability to jump great distances. He is met by a four armed green man and taken back to his city. To cut a very, very long story short, John Carter has been transported to Mars and gets embroiled in another civil war.


The first thing I have to say about the film is that Disney should never have changed the title to John Carter from John Carter of Mars. This was done for the ridiculous reason that Disney executives believed that the Mars part of the title would put people off as not everyone wants to watch Science Fiction. They were obviously unaware that Avatar is the highest grossing film of all time and that 16 of the top 20 top grossing films of all time contain at least some science fiction or fantasy elements, whether it be Orcs, Wizards or Robots beating each other. The decision makes no sense. All one has to do is see the poster or trailer and it is pretty obvious that it is a sci-fi film. The first word spoken is ‘Mars’ for heavens sake!

As for the film itself, it starts with a funny and exciting chase across the desert when the action is suddenly transported to Mars which looks realistic (although I’ve never been). Carter meets a Thark which are well designed creatures with a well thought out an interesting culture and story. From then on, I kind of lost interest in the story. Carter meets a beautiful princess (Lynn Collins) who is on one side of the war and he decides to help her. The problem is that you learn very little about the two cultures involved in the Civil War. You have no real reason for backing one over the other except one has a beautiful princess while the other has Dominic West in Xena the Warrior Princess’ hand me downs and a blue laser weapon.


The large battle scenes lack the heat, intensity and passion of say Helms Deep in The Lord of the Rings and are over in a matter of seconds. And because you know so little about the protagonists, they just feel like faceless pixels. The entire quest theme of the film is flat and dull. Carter spends much of the film trying to get back to Earth but the character isn’t interesting enough for you to care if he does or not. The costumes the human like character wear feel very Conan the Barbarian and as a result feel a bit dated and cheap. The film isn’t camp enough to pull the look of the costume off. On the plus side, the design of the film as a whole is excellent. The CGI is also excellent. As I mentioned, the non humanoid aliens look terrific, as does their pet, a dog like creature that happens to be the highlight of the film. The cities look detailed and sumptuous and the ships feel mechanical and real. Unfortunately the film reminded me too much of other, better films such as Star Wars and Gladiator and that just made me think “why am I not watching those instead?” 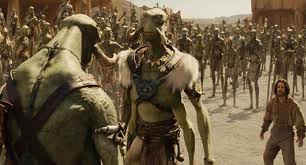 While the film is really just a simple love story intertwined with the search for ones identity, it is complicated quite a bit by the number of names, species and words which the script creates. Some people have complained about this and while it is a bit confusing and off-putting at times people forgave Star Wars its Jedi, Sith and Midiclorians and Harry Potter’s Dementors, Muggles and Horcruxes so perhaps John Carter deserves a break in this respect. Perhaps the reason it has got so much flack for its Tharks, Xavarians and Sab Thans is because the story isn’t compelling enough for the audience to want to take notice of what all of those things are and understand what they mean. The script itself is ok but hardly in Sorkin territory. There is quite a bit of cheesy dialogue. Usually I’d overlook that in an action sci-fi film but when the writer has also been responsible for penning Toy Story, Finding Nemo and Wall:E its inexcusable. Andrew Stanton is better than that. His scripts are usually funny, flowing and flawless but that is not the case here. 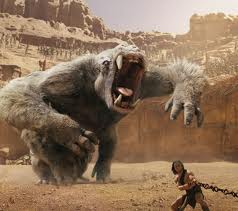 Taylor Kitch is well cast as John Carter. He pulls of the Civil War veteran part of the role well and his confusion on Mars is funny while he is great in the action sequences. Lynn Collins, although beautiful is wooden as Princess Dejah and Dominic West seems to be playing the bad guy with Flash Gordon levels of camp which unfortunately the rest of the film doesn’t have. Perhaps it would have benefited from not taking itself so seriously. Willem Defoe is great as Tars the Thark and Samantha Morton equally excels as his daughter Sola. Mark Strong is scary and intimidating as bad guy Matai Shang. Andrew Stanton’s direction is better than his writing. He makes the leap from animation to live action well and has created a believable world populated at least in part with interesting creatures and characters.

In the end, the film didn’t keep my attention for long enough and the characters lacked the depth to make me worry about their fate. It ends very strongly though and I would go back to the world for a sequel.