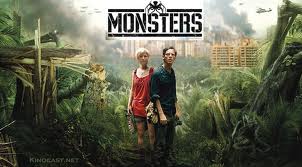 Six years ago a NASA probe carrying possible alien life forms crash landed in . Today, northern is known as the infected zone and the and Mexican military are trying to contain the outbreak of 100 foot high aliens. South of the infected zone, photographer Andrew Kaulder (Scoot McNairy) is on an assignment when he is asked to check on his boss’s daughter, Sam (Whitney Able) who has somehow ended up in a hospital near by. Kaulder’s boss tells him to make sure that Sam gets out of and the two set off through the infected zone in an attempt to get to the American border. 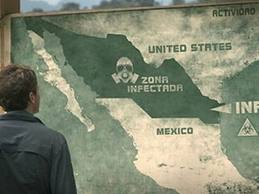 When I saw this film at the cinema a couple of years ago I was blown away. It was made for only $500,000 with Director Gareth Edwards also shooting the film and doing all of the special effects by him self at home. The finished film looks anything but home made as Edward’s has created depth of field with his cinematography and CGI which rivals all but the best that the big Hollywood Studios produce. It is frankly astonishing that the film was made with such a small budget and looks as good as it does. When I was at the cinema back in 2010 there were a few walk outs and I think it probably has something to do with the film’s title. Monsters is a human story and not a monster movie at all but rather a film which features monsters, and sparingly. The alien creatures provide a backdrop to a relationship drama with political undertones.


The political aspects of the film become more apparent towards the end when the two characters are confronted with a giant wall to get across the border having undergone a dangerous journey to get there. Aside from a few other political moments such as talk of Kaulder being paid handsomely for a photo of a dead child but nothing for a smiling child and people talking of America sealing itself off in its own prison, the main focus of the film is the relationship between the two lead characters who happen to be a couple in real life. This familiarity helps to add to the connection and understanding between the two of them and comes across well on screen. Both actors do a good job of reacting to their surroundings and the ordeal they face. Most of the film’s dialogue was ad-libbed but the finished film is coherent while remaining natural. 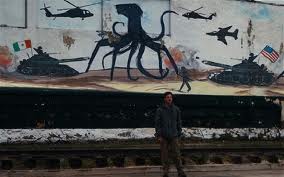 Considering the budget and themes I was glad that Edwards stayed away from the found footage formula that more and more low budget films are using these days. It would have been easy for him to have done this as he wouldn’t have had to worry about such high production values but the traditional method that has been used looks wonderful and has earned Edwards the honour of being asked to direct the latest Godzilla remake. I personally think this is a shame because there must be hundreds of directors who are capable of making a monster movie with a $70m budget but there are probably very few who could make one for under $1m as Edwards has proved he can. I’d like to have seen him stick with this method of film making for a few more years.


As I mentioned earlier, the CGI is for the most part excellent, especially considering that it was not an outside Special Effects company that did the 200 plus effects in the film but the director on his own computer. The creatures themselves, though they only appear a handful of times, look spectacular from far away. This is not more so than in a quite superb scene in which two of them appear to be dancing as they either court or mate with the two human characters watching a gasp with tears in their eyes. When we see close ups of the creatures, the effects aren’t so great but the shots of destroyed buildings and downed helicopters are.

One criticism of the film is that it is hard to believe that the aliens who show few signs of the capabilities could have caused as much damage as they have. Another problem is that Sam’s father is incredibly wealthy so why would he ask a photographer to save her rather than chartering a helicopter or something similar? These are only minor faults however in a film which on the whole is a triumph and shows what is possible when a film maker has a vision and the ability to carry it through. With many film makers becoming ever more marginalised by big budget remakes and franchises, we could see more of this type of film making in the coming years and if they’re half as good as Monsters, I for one can’t wait to see them.