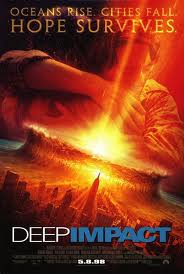 High School amateur astronomer Leo (Elijah Wood) discovers a comet on a collision course for Earth but he doesn’t realise it and sends his photos to an observatory where the find is undiscovered for several months. Meanwhile, reporter Jenny Lerner (Tea Leoni) believes she has a scoop regarding a sex scandal but has actually stumbled upon E.L.E. the Extinction Level Event comet which is on course to strike the Earth. To attempt to combat the comet, the and build a space ship which is landed on the comet’s surface to drill nuclear bombs deep under its surface in an attempt to blow it up and save mankind.


It’s unfortunate for Deep Impact that it was released during the same summer as Armageddon, a film which is probably better remembered, cost twice as much and had a better known cast. That being said, Deep Impact comes off well against the aforementioned film. It’s CGI has held up well and the various family goodbyes are very emotional. The plot unfolds at a decent pace and features a couple of twists. On the downside there are some quite sizable holes. Firstly, it is extremely unlikely that an amateur astronomer would discover a comet heading for earth, especially in the Northern Hemisphere. Even if they did, the observatory they sent their discovery to would have more than one staff member and it would be thoroughly studied. Another problem is that if we were facing the end of the world, why would the Government only build one space ship? With all of the world’s resources at their disposal, why not build two and send them up a few days apart for backup? News network MSNBC also makes Tea Leoni their lead anchor for the biggest story in history despite never having done it before. How unlikely it that?! 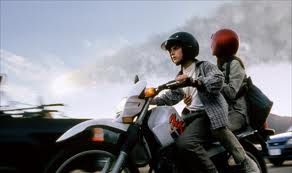 The acting was mixed. I thought that Elijah Wood was alright and his girlfriend Sarah (Leelee Sobieski) was excellent. She bought a lot of emotion and sadness to some scenes. The crew of the space ship which featured Robert Duvall, Jon Favreau, Blair Underwood and Ron Eldard were all fine. They were all convincing as astronauts. Morgan Freeman was convincing and comforting as the President although his main job appeared to be explaining the plot. It is a shame that lead actress Tea Leoni is so disappointing as it is extremely rare that an actress has such a pivotal role in an action-disaster movie. I didn’t feel that her performance was convincing as a reporter and she appeared to have little emotion given the circumstances. Overall I think that director Mimi Leder created an average disaster movie which is in no way great but passes a couple of hours. Leder’s record breaking success with the film however, (this was the highest grossing female directed film until 2008’s Twilight) is a damming statistic on the number of female directors working in .