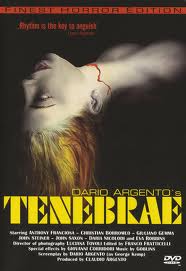 Tenebrae is a 1982 giallo horror/thriller from one of the kings of the giallo subgenre, Dario Argento. American horror writer Peter Neal (Anthony Franciosa) is in to promote his latest novel Tenebrae. Shortly before his arrival, a young woman is murdered in the city using the same method as the killer in his latest book. The local Police ask for his help as more murders take place using the same method. Eventually the murderer is discovered but the murders continue, leading both the Police and the author searching for a second killer.

The film features all of the major trademarks of the giallo subgenre. There are plenty of extended murder scenes which feature excessive blood letting. There is a ‘whodunit’ plot and the film is laced with unnecessary sex and nudity. The music that accompanies the film is the distinctive and funky work of frequent Argento collaborators, Goblin (Title Music here).


The plot is interesting enough but I was able to figure out most of the surprises before they happened and predict one of the two killers. Thematically it is quite similar to the last film I saw The Girl with the Dragon Tattoo, in that it explores violence that is specifically aimed at women and features scene of sadism. The story is also quite similar to the recent John Cusack film The Raven.

Argento shows that he is a master of working behind the camera with this stylish and precise film. It features some wonderful cinematography and a couple of beautiful and technically difficult tracking shots. He is also unafraid to show graphic violence which gained it the ‘Video Nasty’ label in the and meant it was banned until 1999. While the violence is gory and a little shocking, it is not more so that today’s ‘torture porn’ style films such as Saw or The Human Centipede and is not gory for the sake of it. The horror itself isn’t very scary. I didn’t jump or feel tense but it is the violence and blood letting which got the film banned. Many of the female characters walked around half naked and most of the violence is aimed at them which probably didn’t help when it came to censorship. 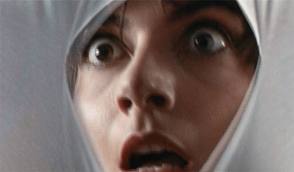 The acing is completely over the top and for the most part, terrible. I have seen few films with acting as bad as this. Nevertheless I didn’t let this annoy me as most of the cast were working in a second language. This is actually what annoyed me. Despite being set in and featuring a mostly Italian cast, the film was shot in English in order to be more widely accessible in . As a result the dialogue feels clunky and badly written and it often looks dubbed when it isn’t because the sound and picture are out of sync. I think it would have been a better film had it been in Italian.

Overall the film is a little uneven and suffers from poor acting but is an fascinating study of sexual deviancy and violence as well as paranoia and madness. It is a must see for any giallo fans or fans of early 80s horror in general and features a great, funky soundtrack.