After battling Central American rebels in the popular but critically mixed 2010 film The Expendables, old school action stars Sylvester Stallone, Dolph Lundgren, Randy Couture and the gang are back for some more noisy, mad and blood splattering fun as CIA Operative Mr. Church (Bruce Willis) enlists Stallone’s group of Expendables in tracking a downed Chinese plane inside Albania. The plane was carrying a valuable cargo which the CIA want but it is taken by international criminal and arms dealer (and I’m not making this bit up) Jean Vilain (Jean-Claude Van Damme) and his mercenary group of caricature Albanians. Stallone and his team must try to get to Vilain before the plane’s cargo leads him to some highly combustible merchandise.


Although first film had its fun and crazy moments I wasn’t really a fan. I’ve never been a big action movie guy and don’t really like Stallone. This time though a lot of the problems of the first have diminished slightly and it is improved with a better story, great cameos and improved special effects. 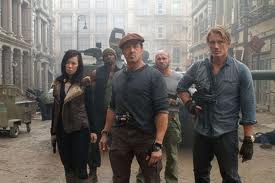 The opening scene is typically deafening as the Expendables enter a Nepalese base to extract a Chinese billionaire (as you do..). This is actually one of my favourite scenes and in fact all of the scenes I liked involved some guy with too much testosterone shooting enormous guns at ‘foreigners’. The film is always at its best during the action scenes. When the pace is quieter we end up with Stallone giving seemingly emotional speeches about the wrong people dying and getting out of the game but they rarely work. These scenes and others like them are hampered by the fact that it is often difficult to deduce what the likes of Stallone, Lundgren, Schwarzenegger and Van Damme were actually saying. It’s not surprising that a lot of the talking is left to the actors rather than the action stars.


I have mixed feelings about the dialogue. On the one hand it is laugh out loud funny but on the other hand it is laugh out loud funny. Even putting aside the likes of Schwarzenegger saying “I’m back” and Terry Crews warning him that if he doesn’t get his gun back, he’ll be “terminated”, the script is ridiculous at best and painful at its worst. There were times when the wisecracking and banter was funny but sometimes I’d had enough of it. I think it really depended upon who was saying what and when, a lot of the time it misses the mark. Much like the first film, the plot tries to introduce a romance for Stallone’s character and once again it feels, well, icky. This time the romance is between the plasticine faced pensioner, Stallone and the beautiful Chinese actress Yu Nan who is exactly half his age and much easier to understand. Yu actually turns out to be one of the better things about the movie which is useful as her appearance helps to mask the absence of another actor. 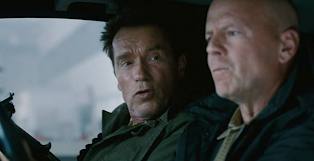 Talking of actors coming and going, there is no Mickey Rourke this time around and another major part of the first film is largely absent too. In their place though are some excellent cameos which include Chuck Norris. Norris’ appearance is the best part of the movie and had everyone in the theatre laughing. I’ve never seen Chuck Norris on film before but his cameo was superb. Also beefing up their roles from the first film are Arnold Schwarzenegger and Bruce Willis, both of which I was glad of although Arnie in particular seems to have gone back to his early 80s style of acting, i.e. not. My favourite scene involved those three I’ve just mentioned. I defy anyone not to enjoy the sight of Arnie and Willis driving around an airport in a Smart Car, shooting the baddies while Chuck Norris walks slowly and silently behind them, picking off who he chooses. It’s a great scene. 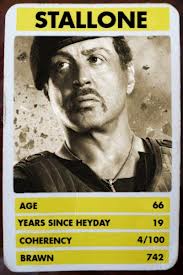 One of the problems with the original was the awful GCI. It is improved here and the blood actually looks red rather than purple as in the original but overall it still isn’t good enough. If Gareth Evans can produce excellent GCI in his bedroom for Monsters then there is no reason why a $100m action film can’t at least match him. The phyical effects though, like the first movie are very good. Another problem with the first film which is largely overcome here is the direction. The choice to replace Stallone with Simon West is vindicated as the sequel is much less busy and messy. Areas which haven’t been improved so much though are in the storytelling. There is a tragedy around half an hour in which is so obvious that they might as well have had a target pained on the guy or have an arrow pointed at him. It is there as a plot device to give the others, especially Stallone some sort of reason to fight and sadness to overcome but it doesn’t work and is far too obvious. The fact that ’s go to bad guys (the Albanians) are used once again feels obvious too.


There were plenty of bits that made no sense here. Bruce Willis is introduced waiting on Stallone’s plane. Stallone has been in a bar all evening and shows no intention of heading to his hanger yet there Willis is, waiting like he was expecting him. He then delivers some orders which must be carried out really quickly. Stallone might not have visited his plane for days or weeks by which time Willis would be very hungry or at least bored. In the opening action sequence most of the Expendables are on boats, running away from the bad guys while Stallone and Statham are in a dense jungle on foot. About thirty seconds later they suddenly appear in a plane above the water! And why a Chinese plane was carrying sensitive Soviet information over , I will never understand. It makes no sense!!


Overall though The Expendables 2 is a marked improvement on the first and despite wanting to see myself as some sort of intellectual who enjoys French drama and BBC4, I had a lot of fun. It’s over the top, ridiculous, too loud and makes no sense but it’s is also self knowing and I’d be temped back for a third instalment.