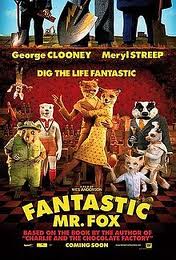 When I first saw Fantastic Mr. Fox at the cinema in 2009 I fell asleep. I think this is the only time I’ve ever slept through a film and although there were mitigating circumstances I still feel bad as Wes Anderson is one of my favourite Directors. I’ve loved all of his pre Mr. Fox films and Moonrise Kingdom is one of my favourite films of 2012 so far. One of the reasons I fell asleep three years ago was because I was bored by the film but due to my love of ’s work I felt the need to go back and reassess it. Unfortunately my first viewing experience was very similar to my second; the film bored me and I consider it ’s worst film by quite some distance.


Based on Roald Dahl’s book of the same name the plot centres upon a fox (George Clooney) who despite promising his wife (Meryl Streep) that he would stop killing farmer’s chickens for a living, can’t resist one final spree in which he goes for three local farms, run by the meanest farmers around. 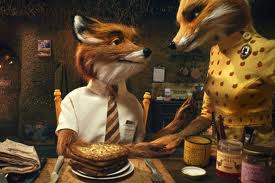 My main problem with the film is that ’s usually witty script is severely lacking here. The tone is typically existential and melancholic but I didn’t get the emotional thrust that I normally experience, perhaps in part because the animation limits the facial expressions that usually accompany films. Take Bill Murray for instance who has appeared in seven out of ’s eight films, including this one. brings a trademark deadpan to most of his roles; coupled with mild annoyance at his surroundings but here you don’t get that because expression is limited by the animation. The same can be said about George Clooney’s central character who has two expressions, cheeky smile and normal. Because the script isn’t as sharp, witty or funny as a lot of Anderson and co writer Noah Baumbach’s other work and because the actors aren’t able to express the lines in a satisfying way, the film falls flat.


The problem with the script stems from the fact that I didn’t really care for any of the characters, least of all the Fantastic Mr. Fox. His trademark click, whistle thing really bugged me and I found his whole attitude confusing and annoying. Side characters weren’t really given enough time to allow the audience to become emotionally involved and the normally superb stilted conversations just didn’t work for me. The plan, escape and retaliation parts of the plot didn’t interest me although I did like the change to family dynamic that Eric Chase Anderson’s Kristofferson character bought and wish that had been explored in greater detail. The quite incredible cast which features the likes of Clooney, Streep, Murray, Jason Schwartzman, Willem Defoe, Owen Wilson, Michael Gambon, Adrien Brody and Brian Cox are given no chance to shine as the script isn’t good enough and the animation blocks all expression. For such a talented cast this is a huge shame because one of the best things about Wes Anderson’s films is that he is able to gather together large and wonderful casts and usually get them all on the same page, delivering fine performances. 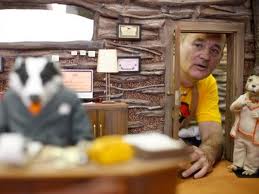 I’ve talked about how I felt that the animation limited the actor’s ability to convey the script but it did actually look very good. It reminded me of the kids TV shows from the 60s like Andy Pandy, Trumpton and Tales from the Riverbank and featured ’s usual colour palate of 1970s browns, yellows and oranges mixed with flashes of bright, bold colour. The stop motion also had a pleasing roughness to it while the camera movements remained very Anderson-esque. The design was also pleasing in parts, most notably for me the human town which had a quaint English feel. The score was also very good. I really liked Jarvis Cocker’s ‘Petey’s Song’ and the soundtrack mixes original compositions by Alexandre Despat (The Kings Speech, The Queen, Benjamin Button, The Painted Veil, A Prophet) with rock songs from the likes of The Rolling Stones and The Beach Boys. The soundtrack is definitely one of the highlights for me.


In the end I was really disappointed by this film and now have been on two occasions. I’m a huge fan of Wes Anderson and it pains me to say I didn’t like the film as I’m a strong proponent of his work but I thought Fantastic Mr. Fox was dull and uninspiring.