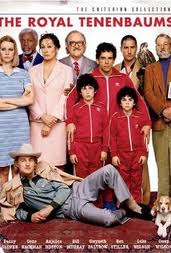 I first saw this film when I was about sixteen on one of my frequent trips to the cinema with friends. When one of them told me about it I thought it sounded awful. I was used to seeing action and comedy films on a Friday night and didn’t want to sit through a film about some family and an old man dying. In the end the film completely shocked me and helped to introduce me to the joys of cinema, seeing passed the Friday night popcorn movies to which I was accustomed. It was also the first of many Wes Anderson films that I fell in love with. I often site Martin Scorsese’s Taxi Driver as being the film which opened my eyes to cinema but thinking about it now, this film did the same thing, albeit to a lesser extent, two years earlier.


Royal Tenenbaum (Gene Hackman) is thrown out of his house by his wife (Anjelica Houston) before their three genius children (Ben Stiller, Luke Wilson, Gwyneth Paltrow) reach their teens. This has a far reaching impact on all of their lives and none of the three grow up to fully reach their potential. Playwrite Margot (Paltrow) stops writing, Tennis champion Richie () retires ages twenty-six after a breakdown and business guru Chas (Stiller) becomes overly protective of his own children following the untimely death of his wife. After years of being out of the picture, Royal decides he wants to become reacquainted with his quirky children but ends up going about it in all the wrong ways. 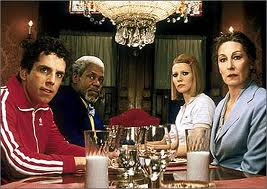 The film features many of the trademark styling for which director Wes Anderson has become famous/infamous. The colour palate is bright and unusual but also has flashes of browns and yellows to give it an old, nostalgic feel. The dialogue is stilted and strangely spoken, almost as though the character aren’t used to conversing with other humans. The manner and topics that they discuss are totally weird and help to further the idea that this is a genius family. The characters themselves are eccentric and idiosyncratic, to such an extent that you can’t believe that any of them would exist outside of a Wes Anderson movie. The plot itself is imaginative, complex and multi layered but comes together to form a satisfying whole.


Much of the humour derives from the dialogue and in particular the two characters of Royal and the family’s servant Pagoda (Kuman Pallana – who, I’m glad to say is still going strong aged 93). Royal uses Pagoda as his man on the inside and is able to get vital information about the family which has all but left him behind. It is through Pagoda that Royal learns of the relationship between his wife and her accountant Henry Sherman (Danny Glover). This is when Royal decides to act, with hilarious but disastrous consequences. The various relationships throughout the film create a web like picture with some characters being closer to others. It’s a complicated picture but works very well. It’s hard to pick a comedic highlight but the sight of family friend Eli Cash (Own Wilson) driving at high speed towards the Tenenbaum house, his face painted like an African tribesman and high on cocaine stands out for me. This isn’t a film full of jokes but it is littered with funny moments and subtle sight gags. The characters themselves provide half of the laughs due to their unusual but well written personalities.

The soundtrack is also wonderful, featuring rock music from the 60s onwards including Van Morrison, John Lennon, The Rolling Stones, Elliot Smith and an interesting orchestral version of The Beatles' Hey Jude. 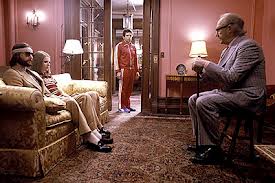 There can be accusations thrown at this film that it is overly pretentious and part of that East Coast clique along with the likes of Sofia Coppola but I don’t mind a bit of that every now and again and here it isn’t pretentious in the sense that it looks down on the audience. The film brings the audience along with it, almost saying “yeah, these people are upper middle class and weird but so what, go with it”. Their problems often seem trivial but they’re never dwelled upon for too long and the audience isn’t asked to feel sorry for them. Wes Anderson provides some masterful direction here too which helps to add, perhaps not realism but a sense that this family is real in its own world. Margot for instance, being the adopted daughter and always reminded of the fact, is often seen in the distance when the family gathers. It is always a reminder that she is on the outside looking in. Anderson also uses the roaming camera that was used to such great effect in the opening of Moonrise Kingdom to takes us through the many levels of the Tenenbaum house. This too gives us the audience the effect that we are looking in from the outside and are not ourselves involved. Another thing that separates the film from the audience is the narration provided by Alec Baldwin. The entire movie is presented as a novel, even giving us chapters to separate scenes with what’s written on the page being the opening of the following scene. My one problem with the film is that the redemption felt rushed. It was almost as though Anderson and co-writter Own Wilson were having so much fun with the second act that they had to rush the ending and as a result it feels a little bit out of the blue. The very end though is excellent.


While ultimately The Royal Tenenbaums won’t be to everyone’s taste I personally think it is a fabulous film full of eccentricity, humour, and underneath it all a great story. The acting is great throughout and often underplayed with Gene Hackman in particular providing a brilliant performance. Bill Murray, Gwyneth Paltrow and Luke Wilson also stand out. My girlfriend who watched the film for the first time yesterday gave it 10/10 (so she’s a keeper…) and I would have probably done the same ten years ago on my first watch.