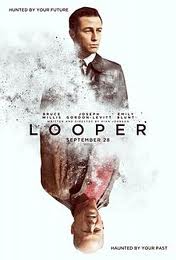 I was lucky enough to get to a preview screening of Looper a full five days before its UK and USA release and boy was it worth getting in early. Looper is a smart and twisting Science Fiction thriller which plays with the ideas and rules of time travel to create a tense film which leads you down unexpected alleys, confounding your ideas and expectations.

It’s 2042 and in thirty years time travel will be invented. Although immediately outlawed the machines are used by the mob to send people back in time for execution thus destroying all evidence of murder. The people who carry out the killing are called Loopers. One of these Loopers is Joe (Joseph Gordon-Levitt) who conducts his job with the utmost professionalism despite a few personal issues. One day though to his shock, he looks up at the tarpaulin ready for the arrival of his next victim when the man who appears in front of him is the older version of himself (Bruce Willis). 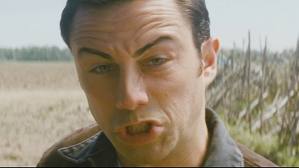 Looper is a film that goes to extraordinary lengths to leave every base covered in its quest to avoid plot holes and inconsistencies and in my mind it deals with the problems associated with time travel very well. One thing I liked is that the older Joe is aware of everything the younger Joe is about to do which gives him an edge if they were to do battle. I also liked that the older Joe in true Bruce Willis style bypasses the whole idea of trying to work out how and why what is happening is happening by saying he can’t be bothered to work it all out. As well as the older Joe having the advantage of memory over the younger Joe, the younger Joe in turn has his own advantages which become apparent. There were several times when I thought I’d worked out what was going to happen or what a particular character’s arc was going to be but the film cleverly manipulates its audience, leading them down alleyways only to jump out at them from behind and spin them around. There is a nice early twist which gave me a smile and plenty more to keep you guessing right the way to the end. In the end it turns out that time travel plays second fiddle to another phenomenon which I was pleased by as there was no mention of this in the trailer which I’ve been trying to avoid for several weeks. The plot is multifaceted with each character having their own reasons for being where they are, when they are and doing what they are doing. It is a dense plot which explores several different ideas and concepts both personal and scientific.

As well as confidently dealing with a complex script which would have been very easy to either make too complicated or too full of holes, Writer/Director Rian Johnson (Brick) also creates a very believable future and fills it with people and events which feel plausible. Cities have continued to expand upwards and outwards but they themselves are filled with tent cities in which a large vagrant class live. Life is cheap and hard in this world in which the haves and have nots are much more separated than today. There is enough in the film to make to world feel as though it is our near future and the technology on display feels as though it is a few logical steps along the road. I especially liked the ingenious solution to running cars after the inevitable the oil crisis and there’s also a great line about China in there which had a lot of people laughing. 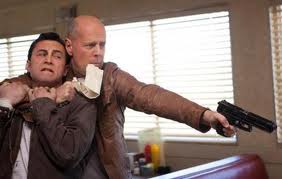 The writing and direction are superb but another strength are the acting performances. Joseph Gordon-Levitt wears heavy makeup and prosthetics to make him look more like Bruce Willis and although this is occasionally a little distracting, it looks unnervingly good at times, especially closer up which is odd. The effect is actually better in close up than when JG-L is in the middle distance. Underneath the prosthetics though Gordon-Levitt delivers a fine performance, adopting a few of Willis’ tell-tale mannerisms and affectations but avoiding pure mimicry. He appears confident and at ease in the dense lead role, carrying off a mixture of hard edged killer and caring young man while switching from one to the other with ease. Bruce Willis equally is very good but we have seen this kind of performance from him many times before. Nevertheless he is on good form here. The chemistry between the two leads was great and really helped with the believability of them being one person. Emily Blunt was another actor who performed very well and in a departure from her more familiar roles. She adopts a convincing American accent, drops a few F-Bombs and looks comfortable holding a gun. She brings to the fore the feminine caring side when it matters though. Probably the stand out actor though despite the three A Listers is Pierce Gagnon, a very young child actor who is incredible in a pivotal role. He and Gordon-Levitt have some funny and tense scenes together which work very well.

Overall there was little I didn’t like about Looper and it has gone straight into my Top 10 films of the year so far as well as being probably my favourite Sci-Fi since 2009’s Moon. It treats its audience with respect and isn’t afraid to keep you them of the loop for a while as it teases them with false and sometimes seemingly false information. It is well designed and acted and features a wonderfully multifaceted and intelligent story which rewards patience and concentration with a fantastic ending.

15/10/12 Update. I saw the film for a second time yesterday and I didn't think it was the sort of film which was better or more enjoyable on a second viewing. I didn't notice anything new and would probably give it 8/10 for my second viewing rating.
Posted by Unknown at 00:23