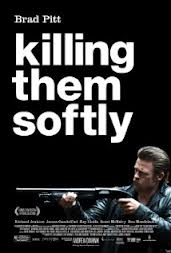 In a rare switch around audiences in the UK, including myself are able to see a new release a full two months ahead of our cousins across the water. The release in the States has been put back for a couple of reasons including to increase its chance of awards success early next year. If this film is even in contention for major awards then I’ll eat my shoe (providing ‘my shoe’ is actually a veggie burger or similar). The film is nowhere near good enough to be in contention for awards and I have a hard time calling it good.

Two men, Frankie and Russell (Scoot McNairy – Monsters and Ben Mendelsohn – Animal Kingdom) rip off a card game run by small time gangster Markie (Ray Liotta) having been tipped off by Johnny (Vincent Curatola – The Sopranos). The heat is soon on them though and Frankie, Russell, Johnny and Markie come under the suspicion local hit man Jackie (Brad Pitt) who also brings down aging hit man Mickey (James Gandolfini) to help out. 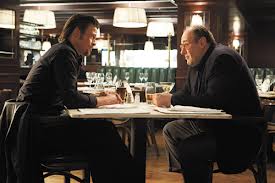 I was excited by the prospect of this film and although I try to avoid spoilers and reviews had heard a lot of positive stuff plus one or two mixed comments. I went in with an open mind and wanted to enjoy it. Unfortunately it has pretentions of being something that it isn’t. It tries to have the smarts and edge of a Scorsese gangster picture while maintaining an out there and grimy surface in a similar vain to something like Spun. The story is almost nonexistent and barely took my interest but perks up a little when Gandolfini arrives. I was never really interested in the card game and found the subplots much more interesting. The dialogue was quite sharp and aside from a few puerile jokes I thought it was fine. For a 97 minute film though it feels very long. The plot is set against the backdrop of the 2008 financial meltdown and Presidential Election and we often hear snippets from C-Span or talk radio. Very occasionally what we see or hear has parallels with the on screen action but more often than not they are just distracting and far too frequent.

The characters are generally quite good and the acting is fine overall but there are a couple of shaky performances. Scoot McNairy is impressive as the scared kid who is in too deep and I bought Ray Liotta’s performance as the small time gangster but Brad Pitt never feels believable. He plays his character with bags of cool and is hard hitting when necessary but I never thought that he was a smart, cold killer; I just thought he was Brad Pitt and that leads to problems when it comes to suspension of disbelief. Vincent ‘Johnny Sack’ Curatola is pretty good but it is his Sopranos co-star who steals the film with a blinding performance as an out of touch, drunken hit man who is close to the edge. He is a character who has real menace about him, despite Pitt’s character performing the majority of the violent acts in the film. I’d like to have seen more of Galdolfini and Pitt’s characters together. 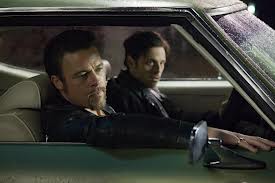 I liked the Direction and Cinematography throughout the film and there were several nice camera angles used including a very pleasing one on a car door. Director Andrew Dominik has had no trouble making his films look good in the past with The Assassination of Jesse James being one of the most beautiful looking films I’ve seen this year. Here he is in a very different landscape but really shows off what a dump it is. Despite filming amongst the ruins of New Orleans the film still looks attractive in the kind of decaying beauty way which I often talk about.

Something that needs mentioning is the violence the film presents. It is often excruciating to watch and one beating in particular is very tough to get through thanks largely to some very effective sound work. It feels like the volume is pushed right up and this allows the audience to hear and feel every punch and kick as it makes contact with flesh and bone. Another scene is shot in slow motion and reminded me of Dredd. Although the violence isn’t any worse than in that film or say Lawless it somehow feels more real and I think that is largely due to camera angles and sound.

Overall Killing Them Softly looks good and has a couple of decent performances but the story isn’t up to scratch and in the end it comes off as tedious, empty and sometimes annoying. People will go and see this film because it features guns and stars Brad Pitt but there are plenty of better films around at the moment which deserve the attendance more.