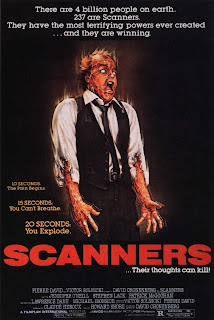 Last night I was fortunate to take in a David Cronenberg double bill at the lavish Plaza Theatre in Stockport. The evening was run by the Grimm Up North people who put on an excellent show which attracted a decent crowd. The first film on the bill was Scanners, Cronenberg’s 1981 science fiction horror which was for him at the time, a fairly conventional film. Throughout North America there exist people who are ‘scanners’. Scanners are able to read people’s minds and move objects through telekinesis. Weapons manufacturer ConSec are attempting to use scanners as weapons but rogue scanner Darryl Revok (Michael Ironside) halts the programme by killing ComSec’s scanners and forming his own group who wish to rise up and stamp their authority on ‘normal’ people. ComSec uncover Cameron Vale (Stephen Lack) and train him to take down Revok.


I thought Scanners was great fun. The movie has a pretty decent story behind it and I was engaged by the espionage and war that the plot created. The central idea is interesting and manages to sustain the plot for over 100 minutes. There are conspiracies and twists which add to the excitement and occasional action sequences which gives you more bang for your buck. In addition to this there are a couple of well written characters although the acting is frankly dreadful. Lead Stephen Lack is quite literally laughably awful. I can’t remember seeing a central performance which was so wooden and cringe worthy. No one really shines although Michael Ironside isn’t terrible and Robert Silverman is actually quite good. He was the acting highlight in a film full of poor performances.


The problem of the bad acting wasn’t helped by some awful dialogue. Although the story was very good, some of the written dialogue was abysmal and caused the small crowd in the Art Deco theatre to burst out laughing. Lines like “What a nice surprise… you’re very attractive” had the audience guffawing at the screen and there was very little that felt natural. A colleague today likened the picture to a student film and I agree that in certain aspects he’s spot on with his assessment. Where the film is elevated above just a small budget horror is in its ideas. Great Sci Fi should have ideas at its core and this film certainly does. The plot reminded me a little of Blade Runner in that the scanners walk amongst us, hidden in plain sight. There is also a lot of X-Men in there too and the plot mirrors the recent X-Men First Class in a number of areas. The film explores ideas of parental neglect, scientific malpractice, espionage and conspiracy. All of this keeps the viewer engaged in a way in which last night’s second film The Brood failed to do. 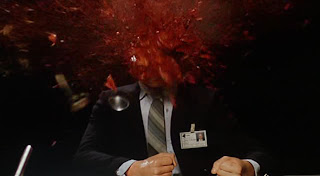 An early Cronenberg film would be so without some good old fashioned body horror. Early on there is a nice scene in which a scanner attempts to ‘scan’ someone without realising the person they are scanning is also a scanner. This leads to a bloody and eye watering climax. The actual film’s climax is an epic duel between scanners and is terrific. The effects look fantastic and the dual lasts several minutes, amid silly faces and excellent prosthetic work. The gore never reaches the dizzy heights of The Fly but there’s a good five minutes of grotesque, puss filled, face peeling, blood spurting action which will enthral and repulse in equal measure. Along with the effects I also thought that the score and sound design were excellent and added a lot to the tension and excitement I experienced.


Scanners hasn’t aged particularly well and many of the laughs are derived from its poor aging. A scene featuring computers is especially funny and in general the film is looking a bit ropey. The film was produced for a pretty low budget ($3.5 million) in 1981 and for me it is the sort of movie which is ripe for a remake. I’m not usually a fan of remakes but if the central ideas and story as well as R rated gore could remain, I think a re-imagined or reinvigorated version of Scanners would be a great idea. Overall I liked the film a lot. The acting is terrible and the dialogue poor but it’s fantastic fun and has a solid story, great effects and a nice amount of gore. It’s a cracking little horror movie.