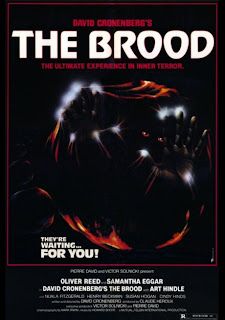 The second half of Grimm Up North’s recent David Cronenberg double bill was 1979’s The Brood. Creepier and less funny than Scanners, the first film on the bill, The Brood stars a late period Oliver Reed as a Psychotherapist who specialises in the field of ‘Psychoplasmics’, a method in which patients let go of suppressed emotions through physiological changes in their bodies. One of Dr. Raglan’s (Reed) patients is Nola (Samantha Eggar), the wife of Frank Carveth (Art Hindle). Frank is worried about his wife’s treatment at the hands of Dr. Raglan and begins to suspect something else is wrong when their young daughter returns from a visit covered in scratches and bruises. Frank is right to worry as an unwanted side effect of Nola’s treatment is the creation of The Brood, childlike monsters who feed off her negative thoughts, attacking and killing based on her emotions.

Unlike Scanners which I enjoyed all the way through, The Brood takes its time to get going. There are large swathes of the film where I was feeling a little bit bored by what was going on and I wasn’t sure where the film was going. What kept me interested was an early appearance of one of The Brood. The confusion about what it was and where it came from helped me to remain focussed throughout the less interesting moments before a final half hour which was full of excitement, action and terror.


The idea behind The Brood is quite interesting but I don’t feel as though it was explained very well. For a long time I didn’t realise exactly what Psychoplasmics was or how it affected the patients but I’m willing to blame some of this on the fact that I’d already been in the theatre for a couple of hours after a long day at work. When the true side effects of Psychoplasmics are revealed, they are deeply disturbing and grizzly. The final scenes were fantastic. How could you not enjoy the sight of Samantha Eggar piercing a womb like sack on her leg before licking clean the bloodied new born while upstairs Oliver Reed shoots holes in crazed looking monster children? It’s a frenzied and highly entertaining end to the film. To compare the film to Scanners (which I’d seen moments earlier), the second half of The Brood was much more exciting but it wasn’t engaging for the entire runtime unlike the previous movie. 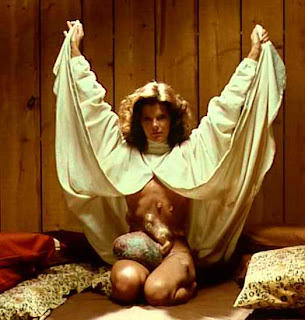 Although not as cringe worthily funny as Scanners, The Brood did feature some unintentional laugh out loud moments. One scene in particular in which Dr. Raglan pulls a gun on Frank had me laughing for more than a few seconds. Reed pulls the gun out of his pocket, lightning fast, holding it at his waste in that was that they do in the movies before uttering the line “Frank, I have a gun” in his Thespian manner. The voice in no way matches the action and Reed sounds camp while saying it. In general though the film manages to avoid the unfortunate although welcome laughs that Scanners created. The acting isn’t quite as bad as in the aforementioned movie either. Even though he was well and truly on his way down, Olver Reed still outmuscles everyone else for centre stage and owns all of his scenes. The rest of the cast, made up mostly of small time Canadian actors fail to compete with their more illustrious colleague. Art Hindle spends most of the film with his face all scrunched up in a bid to look confused and worried. It appears to be his only facial expression. Samantha Eggar has her moments as the disturbed woman at the centre of the film but is more memorable for her character’s actions rather than her acting but Robert Silverman shines in his few scenes.

The film is well made and Cronenberg shows adept work behind the camera. The Brood themselves are well shot and there are a couple of jump likes scares as well as the overall threat and tension which their presence brings about. The film is inherently creepy because these creatures resemble children so closely yet look totally alien. To see them bludgeon people to death is very unnerving. A scene inside a school is utterly terrifying as we watch a couple of The Brood beat a teacher about the head with hammers as the children (who must be about 5) look on in horror. I’m pretty sure the disturbed looks on their faces had nothing to do with acting. Howard Shore provides his first ever score for this film but it isn’t as memorable as the one he produced for Scanners or indeed his magnificent Oscar winning Lord of the Rings scores. The Brood is a dark and disconcerting film which takes its time but ends in a flurry of horrifying action and violence worthy of Cronenberg’s name.