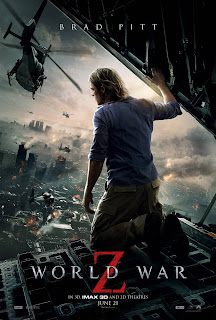 World War Z or World War Z as it’s pronounced here in the UK is a zombie apocalypse movie based on the 2006 novel of the same name. It takes the traditional ideas of a zombie movie and expands them to a global scale, telling at the same time the story of a single Philadelphian family whose patriarch, ex UN investigator Gerry Lane (Brad Pitt), is tasked with travelling the globe in search of the outbreaks origin, with the hope of discovering a cure. The movie’s production has been one of the most troubled in recent years with an ambitious shooting schedule and numerous re-writes and re-shoots, even up to the end of 2012, taking the movie’s budget up to around the $200 million mark. If the busy screening, star appeal and word of mouth I’ve already encountered are anything to go by though, the movie is sure to make a very tidy profit within the next couple of weeks.

I try to avoid reviews before I write my own in case they inform my opinion but I’d heard a couple of mixed verdicts before seeing this movie. Coupled with the production troubles, I wasn’t expecting a brilliant film. I was pleasantly surprised then by World War Z (Z) as it excited, entertained and scared me from start to finish.


Following a couple of minutes of brief exposition about Brad Pitt’s character and his family life, the film doesn’t hang around before letting the apocalypse loose. From around five minutes in, my heart was racing and it remained so for the majority of the film. I haven’t seen many films which can maintain the threat for such a prolonged period and this film keeps the action coming, flipping from tense slower scenes to the louder, more traditional action scenes to keep things fresh and exciting. The movie is an onslaught, rarely letting the audience relax. The only time I felt as though there was no peril in the entire film was onboard the ship but for the rest of the two hours, I felt on edge, worried for the character and humanity. Although this is a major Hollywood movie, I still worried for the central character. Generally you know with this type of film that your hero will be fine but I wasn’t so sure here and this added to the tension.

The plot takes us to several different countries and I liked the ambition and the sense that the outbreak was on a global scale. Each new location bought about new challenges and questions and the three main areas that Lane goes to, adds three different genres to the movie. His first stop creates a military atmosphere which reminded me a little of Zero Dark Thirty. For the second, the film takes the political/religious route and in the final scenes, science comes to the fore. I liked the change of pace and atmosphere and felt that it was generally well judged. It didn’t feel messy or overly ambitious and each vignette worked to compliment the others. 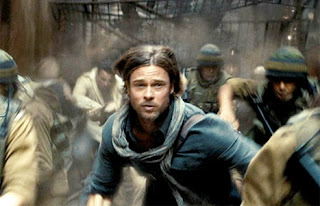 While watching the opening credits my heart sank a little when I read the names Damon Linelof and Drew Goddard. I have serious problems with their writing and feel as though neither knows how to end a movie. Plot holes are also a major issue with the pair. I’ve since read that both were hired for one of the late re-writes and that Goddard in particular was responsible for altering the movie’s ending. An original ending, set in Moscow’s Red Square was scrapped for both political and thematic reasons and instead, a quieter ending, more in keeping with the rest of the film was shot. I wasn’t keen on the very final scene but it was probably needed to tie everything together and I thought the climactic scenes were great. You could see what was coming for about twenty minutes but I was glad the film didn’t go down the route of another huge, city destroying battle. It’s been done so many times recently. Like the recent Man of Steel, this movie contains Judeo/Christian symbolism and the parallel with Moses parting the Red Sea while saving his people is an obvious influence. On the whole, the film doesn’t show signs of the re-writes or production troubles.

Something that I thought was excellent was the way in which the zombies moved. We get fast zombies here and I have no problem with that. They swarm in masses, showing no sense of emotion or feeling. They bang into door ways, cars, buildings, anything to get to their prey and the sense that they are ravenous beasts really comes across. Because of their speed you never feel safe as they could be lurking somewhere in the darkness and be within striking distance even if quite far away. The makeup and effects for the zombies was also very good, both while up close and from wide angle shots which show the full effect of their rampaging menace. On the whole the movie looks very good but I did have a couple of issues with it. I thought that some of the CGI was a bit substandard. For a $200 million movie, I expected a little better. It was usually fine but there were occasional effects which looked shoddy. A lot of the helicopters looked really fake and this took me out of the movie. The scenes set in Philadelphia also looked nothing like the Philadelphia I know and it was obvious to me that a British city (Glasgow) had stood in. Other than that though, this is a very good looking film. 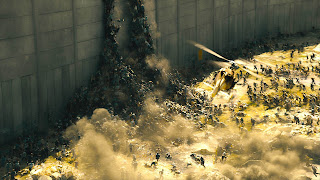 The score works though doesn’t stand out hugely. It fits well, featuring Hitchcocian strings atop a thumping base line. It certainly adds to the tension and you can hear the influence of Matthew Bellamy in a couple of the pieces. Occasionally though it got a little close to the score of 28 Days Later and this just reminded me of that film, rather than making me concentrate on this one. My girlfriend even said to me on the way out that “It was just basically the American 28 Days Later”. The acting was competent from top to bottom but there won’t be any awards handed out for it. Brad Pitt is well cast in the lead role. He suits it and plays it well but doesn’t really shine beyond his normal star presence, Brad Pitt-ness. He’s been much better elsewhere. Mireille Enos plays the worried mother in an acceptable manner but isn’t given much to do beyond hold a telephone and look worried. I thought that James Badge Dale again stands out in his small role and Daniella Kertesz was very good. In terms of acting though, it’s the extras that really make the film. Their portrayal as the teeming mass of teeth is terrifying.

Overall I enjoyed World War Z (Z) a lot. I was tense and gripped all the way through and liked the epic scale it took on. It successfully creates and shows the mass panic and hysteria that would grip a nation or the planet in the event of an outbreak like this and the central character is a good tool for taking the audience around the world. It’s refreshing to see a film look beyond the house or small town in which survivors are holed up and the world-wide impact is one of the film’s major selling points. Occasionally things are a little too easy, too obvious or too predictable and there was far too much exposition for my liking but for a summer blockbuster, I’ve experienced much worse. I left the cinema with the film still on my mind and was imagining a sudden swarm of zombies rushing through the half empty, dimly lit car park on my way to the car, so if the film can have that sort of impact on me after I’ve finished watching it then it must be pretty good.