"Out of the fire of love come ashes. Even the greatest love eventually fizzles out" 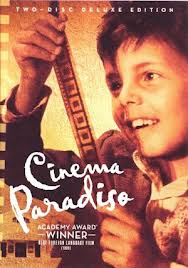 Giuseppe Tornatore’s much heralded 1988 film Cinema Paradiso begins with a famous film director in called Salvatore (Jaques Perrin) receiving news from his estranged mother that a man called Alfredo has died. The director then remembers back to the mid 1940s when he was a young child in the Sicilian . The young Salvatore (Salvatore Cascio), nicknamed Toto is a highly intelligent six year old who becomes fascinated with cinema during his frequent visits to the local picture house Cinema Paradiso. The boy develops a friendship with an old projectionist called Alfredo (Philippe Noiret) and begs him to teach him the art of film projection. Alfredo is hesitant at first, deeming it an unfit job for the sprightly Toto but through charm and persistence the boy finally becomes an apprentice. A few years later the now adolescent Toto (Marco Leonardi) is running the Cinema Paradiso and begins messing around with his own films. One day he spots a beautiful girl at the railway station (Agnese Nano) and his infatuation and love of film becomes shared with his love for the girl.


The film follows Salvatore/Toto from a young boy, right through to his middle age and is one of the most loving films I’ve seen in a long time. This is not only a romantic drama but also a love letter to film itself.


The film’s setting is quite beautiful. Mostly filmed in a largely unchanging village in you get a sense of isolation and an old fashioned way of life. This is highlighted early on when Toto sneaks into the empty cinema to watch a priest censoring the films which are to be shown. The scenes he orders to be removed make a remarkable comeback later on in a scene which honestly bought tears to my eyes. Although set in the town of Giancaldo the film was actually shot in the director’s hometown of Bagheria, a beautiful old town on Sicily’s northern coast. Other than being able to date some of the films shown at the Paradiso, you could be looking at the town at any time from the 1840s-1940s so little does it change. 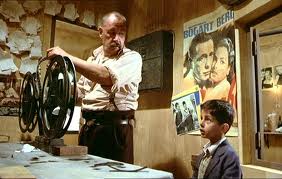 The central story is incredibly charming and features an array of interesting characters. As well as the central players, other villages add to the sense that this is a real place you are watching and create some cute side plots. Toto as a young child is SO cute! He reminded me a little of Jackie Coogan in The Kid but is much less of a victim and has the measure of the adult villagers. His love of cinema is inspiring and it’s great fun to watch him looking on with awe at the likes of Babes in Toyland and , even doing his own Red Indian sound effects during the latter. As a teenager Toto turns his attention to projecting as well as watching the films and even tries his hand at his own rudimentary film making. It isn’t just film which catches his eye though as the stunning Elena comes into the picture. His dedication to her is as equally as touching as his love of film. The Alfredo character has the role of surrogate father to Toto as well as teacher. He imparts a lot of wisdom and is responsible for some of the lighter moments as well as one of the saddest. He’s a delightful character to watch. 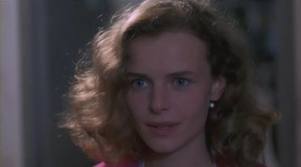 The acting is first rate throughout with the highlight coming from the young Salvatore Cascio who won a Best Supporting Actor BAFTA Award. For a child so young his performance is extraordinary. Phillipe Noiret also won Best Actor at the same BAFTA ceremony and he too gives a wonderful and poignant performance. For me he is slightly overshadowed by the young Cascio simply due to his tender age. Marco Leonardi is also excellent as the star-crossed lover, playing Toto as a teenager. Agnese Nano is great as the young love interest and is one of the most graceful and stunning actresses I’ve ever seen. Others including Priest Leopoldo Trieste, Brigette Fossey and Jaques Perrin as the middle aged Salvatore give great performances too. 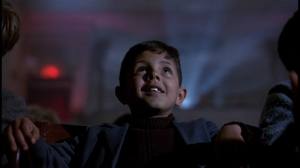 For me the most wonderful thing about Cinema Paradiso is its love of cinema. We spend much of the film watching the actors watch and enjoy the films shown at the cinema. We see the rural audience gripped by the latest Italian drama, guffawing at an old Chaplin two-reeler and titillated by the sight of a bare back in a saucy romance. It’s delightful to look back to a time when a visit to the cinema was something that a community enjoyed as a whole. These days I try to plan my trips to the cinema so that I avoid sharing a screening with others who tend to check Facebook, scoff popcorn, talk and kick my seat. It’s a shame because Cinema Paradiso makes the idea of watching film with your community look fun. As well as the delight on the faces of the actors we also catch glimpses of some of the best film of the period including Charlie Chaplin’s City Lights and Modern Times plus the likes of Casablanca, Fury, Gone with the Wind, Seven Brides for Seven Brothers, The Outcry, Wings, His Girl Friday, The Outlaw, It’s a Wonderful Life, Bitter Rice plus scores of great looking Italian films which I’ve never heard of before including those by the likes of Antonioni, Visconti and Rossen. This truly is a celebration of cinema.


The ending includes the most moving montage sequence I’ve ever seen and has been parodied countless times, including by The Simpsons. It’s a fantastic ending to a beautiful film. The version I saw was the director’s cut which was 168 minutes long. Despite this extremely long runtime it whizzed along and I hadn’t even realised it was that long until I looked at the time when it was over. At no point was I bored and my only qualm was when we progressed the story and changed actors. I’d become so attached to the young Toto that I was annoyed when he morphed into the adolescent version of himself. Soon after I’d become so attached to him that I was once again annoyed when he became the middle aged Salvatore!


Cinema Paradiso is a compelling and touching drama set amongst some of the greatest films in history and features a loving central story which will have you yearning for more.