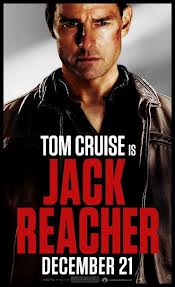 The popular Jack Reacher series of novels had its film rights snapped up soon after the release of the initial novel in 1997. Fifteen years and seventeen books later, the first film has finally made it to the screen. The ninth book in the series Long Shot forms the basis of the film Jack Reacher. A lone sniper sets up shop in a parking garage before training his sights on people across the river. In quick succession he fires six shots, killing five random people. A trail of clues left at the scene leads to his arrest and after failing to confess he asks the police to get him Jack Reacher (Tom Cruise), an ex Military Policeman and drifter. By the time Reacher gets to the scene of the crime the accused has been beaten into a coma. Believing the culprit is guilty based on a previous encounter; Reacher is nonetheless hired by Defence Lawyer (Rosamund Pike) and begins to uncover a deeper plot.

I’ve read just one Jack Reacher novel and enjoyed it but not enough to rush out and continue with the series. Even though I’m not a die hard fan I raised my eyebrow at the casting of Tom Cruise as what has become a distinctive and well loved character. Having seen the film, to me the casting now fits perfectly. Cruise may lack the height and physical presence of Reacher but he more than makes up for it in screen presence and overall there are very few areas in which I can fault the film.


I was actually really surprised at just how much I enjoyed the film and how polished it was. I honestly wasn’t expecting more than an average throwaway thriller that would pass a couple of hours but came out struggling to think of an area I had a problem with. While the film isn’t going to be winning many awards, it’s a rare example of a mid budget Hollywood thriller that ticks all the boxes. The main talking point will be around Tom Cruise’s casting. Sure he isn’t tall enough and the character doesn’t drink anywhere near enough coffee but Cruise brings with him a cool, calculating charm which both draws people to him and distances himself from them. He almost sucks you in, ready to pounce at any time. The script and Cruise’s also performance nail Reacher’s intellect and investigative prowess. Cruise like the film in general was a pleasant surprise. 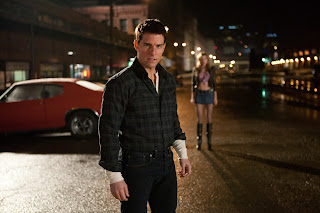 The supporting cast are generally good too. Rosamund Pike plays a decent secondary role as an idealistic Lawyer. She, like most women is drawn towards Reacher but is uneasy in his presence. Richard Jenkins’ DA is fine as are the likes of David Oyelowo and Jai Courtney. Robert Duvall has a brief but fantastic cameo but besides Tom Cruise the other surprise bit of casting was German Director Werner Herzog as the film’s antagonist. Herzog, one of my favourite Directors, has a voice I could listen to all day. His monotone Bavarian dialect is hypnotising and he perfectly suits his character of a terrifying oligarch who will do literally anything to survive. I have to be honest and say that acting wise he was a weak link but I’d have Herzog in every film. It would improve pretty much any film, even more than putting a Shrek in it.

The plot isn’t full of twists and turns but rather weaves gently as Reacher gets to grips with his surroundings and the trail of people and events involved in the killings. I was never bored and always intrigued by what was going on. One of the things I loved most about the novel I read was how it kept you guessing. The plot is reasonably conventional but more than interesting enough to sustain the 130 minute run time. Something that the Reacher novels are famous for is their violence. In the UK the film has a 12A rating so the violence has been massively toned down for the film but even so it is top end 12. There are a couple of grisly scenes but most of the violence is implied rather than seen. I think there is enough to satisfy most people but not too much that it won’t attract a large audience. Something which is more prevalent in the film is a great amount of humour. I found several scenes very funny and the script is quite witty in places. Reacher is given some great, snappy dialogue and placed into many amusing situations. 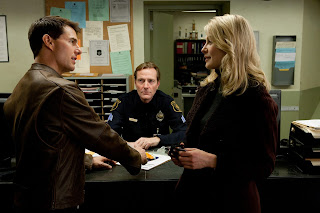 The film’s centrepiece is an excellent car chase. The chase is given no soundtrack and merely relies on the sounds of the engines, gearboxes and tires. As well as being wonderfully shot (the whole film features above average cinematography), I also liked its realism. It isn’t perfectly manicured and Reacher is shown to be a very capable but not superhuman driver. Occasionally he will slightly lose control of the car or spin a little too far and there are numerous bumps and scrapes along the way. I thought it was one of the better car chases I’d seen in recent years and had a great ending which had unfortunately been slightly spoiled by the trailer. A third act shootout was also really well done and although never tense, also never dull.

Overall Jack Reacher is a film that I have very few problems with. I was never bored; it was well acted and directed and features an interesting and complicated storyline which kept me guessing. There are a couple of decent action set pieces and although Tom Cruise may not embody the physical appearance of Jack Reacher, he certainly makes a very good screen version. I look forward to a few more instalments before Cruise’s Iggy Pop style frame gets too old.