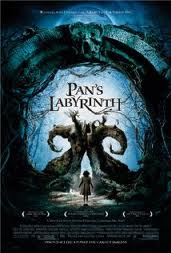 Guillermo del Toro’s dark fairy tale Pan’s Labyrinth has been on my list of films to watch for years and I’ve finally got around to seeing it. I’ve had no excuse as my girlfriend bought it at least two years ago and it has been sitting on my shelf gathering dust ever since. I’ve found that Pan’s Labyrinth is the sort of film that comes up in conversation with people who generally don’t watch films that aren’t in English and won numerous awards upon its release. My girlfriend is a big fan and though I enjoyed the effects and historical side to the story, I wasn’t completely won over by it.

In Fascist Spain a young girl called Ofelia (Ivana Baquero) is forced to leave her home and move to the countryside where he mother’s new husband is beating into submission the remnants of the anti-Fascist rebels. The girl has an affinity for fairytales and soon meets a fairy who takes her into a labyrinth. There she meets a goat like creature called a Fawn who tells her that she is a long lost Princess and must complete three tasks in order to be united with her Royal father. The fairytale is set against the backdrop of a vicious new regime made real by Ofelia’s new stepfather Captain Vidal (Sergi Lopez). 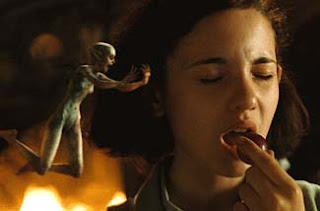 I am very interested in twentieth century history but my knowledge of the Spanish Civil war only stretches as far as its brief mention in Second World War books and the odd Picasso painting. I was glad then to see that the film is set against the end of the war and the beginnings of Franco’s regime as I find the period and setting interesting. A subplot to the film is Captain Vidal’s routing out of rebel sympathisers while trying to destroy the rebels themselves. This side of the story interested me quite a bit. I wasn’t as interested in the fairytale elements of the plot. I could understand Ofelia’s need for escapism and release from her frankly miserable life and the form this takes is wonderfully imagined and beautifully designed. One thing I liked is that you are never sure if the fairytale is actually real or simply imagined by Ofelia. The excellent ending also leaves this question hanging. For me there are similarities in the plot to Zach Synder’s awful film Sucker Punch though thankfully the similarities only extend as far as the fantasy world to which one withdraws when unhappy. 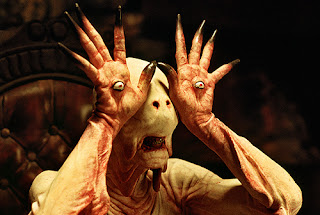 The Direction and setting is superb. I really liked the Mill in which the family lived. It had a sort of fairytale quality to it which matched the more obvious fantasy elements. The designs of the human costumes were all excellent too. What really stands out though is the creature design. There are only a few creatures in the film but all are exquisitely imagined and produced. The fawn has a sort of ageing rocker look to him and the Pale Man beast was one of the strangest but most satisfyingly well designed creatures I’ve seen. I loved how his eyes worked and wish that there was more of him in the film. The film’s budget was only around $19 million and although I’ve seen special effects done for a lot less, they still look remarkable for the budget.

All these years I’ve thought that Pan’s Labyrinth was a children’s film, how wrong I was! There is quite a lot of shooting, beating and stabbing and occasionally the violence is gruesome. This only helps to bring out Captain Vidal’s sociopathic nature though and show him for the villain that he is. The film manages to be both magical and brutal and the two worlds are quite different though both united by a willingness to disobey. The ending is excellent and overall I enjoyed it a lot. There are parables to be found all over it but ultimately I just wasn’t able to get on board with it as much as I’d liked to.

New comments are not allowed.