"Check it out, Vagina Shark!" 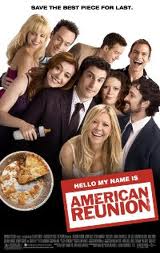 Thirteen years after graduating high school, friends Jim (Jason Biggs), Kevin (Thomas Ian Nicholas), Oz (Chris Klein), Finch (Eddie Kaye Thomas) and Stifler (Seann William Scott) all end up back in their home town of East Great Falls for their High School Reunion. The plot centres around Jim and Michelle’s (Alyson Hannigan) stuttering marriage and on Stifler’s inability to grow up. Apart from that there are numerous side stories regarding every main character including Jim’s Dad’s (Eugene Levy) loneliness after the death of his wife and various old feelings returning. 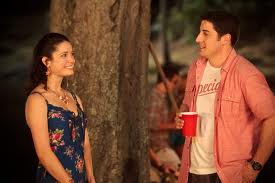 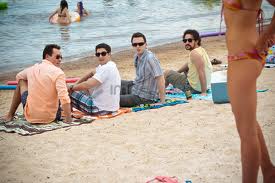 At times the sentimentality and drama put a stop to the laughs and the series has always been at its best when Stifler is up to something disgusting or Jim is getting himself in an embarrassing situation. The more dramatic scenes bought a bit of depth to the story but I’d rather of just had another couple of scenes of Stifler calling someone a dick and pulling that face. Talking of sentimentality though, that is kind of how I feel about the films. Although I’m a couple of years younger than the characters, it feels as though I’ve been with them every step of the way. While they were trying to get laid back in American Pie, we were doing just the same. Now, 13 years later, the characters have grown up and just like my friends and I; some are successful, some are not, some are married and some have children. It’s funny how our lives have echoed theirs. Although, they’ve seen way more hot chicks with their boobs out. 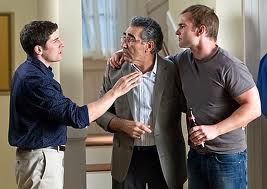 And on that subject, there is plenty of that in the film. One of the best scenes in the film involves Jim trying to keep his cool and do the right thing while a hot neighbour is throwing herself at him. Add Stifler to the equation and some PVC sex gear and you’ve got a classic American Pie set up. Something that has improved throughout the series is the acting. The whole cast seem much more at ease than in the originals and apart from the odd one (Tara Reid) can act with some conviction now.

This film is everything you’d expect and want from an American Pie movie. It’s funny, irreverent and silly but with a sweet centre. And while there is nothing new and some of the jokes miss the mark, the majority still made me laugh and made me feel 15 again. The dramatic scenes are a bit of a drag and it’s probably a three star movie but my affection for the series makes me want to give it a four. It’s no better than the original two but no worse either.