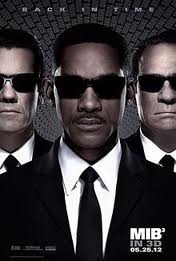 Ten years after the disappointing Men in Black 2 and fifteen (really!) years since Men in Black, Will Smith and Tommy Lee Jones are donning the black suits and Ray-bans once again. Agent J (Smith) and Agent K (Jones) learn that the alien murdering Boris the Animal (Jermaine Clement) has escaped his maximum security LunarMax prison cell on the Moon, 43 years after K arrested him in . Boris gets hold of a time machine and goes back to 1969 where he murders K. J has trouble understanding what has happened and goes back to 1969 himself where he meets a younger K (Josh Brolin) and the two of them attempt to apprehend Boris before he kills K and sends an army to attack and destroy the Earth. 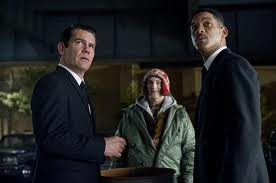 I’m a big fan of the first Men in Black film and will watch pretty much anything Will Smith is in so I was excited at the prospect of a third instalment of the franchise. Unfortunately I left disappointed. Quality wise this is much closer to Men in Black 2 than Men in Black. My two main problems were that it wasn’t funny enough and that it was really boring. Will Smith is a naturally funny man and has bags of charisma but here his jokes fall flat and he doesn’t seem cool enough. Jermaine Clement, who I travelled over 400 miles round trip to see perform as part of Flight of the Concords was also a little bit disappointing although his accent was very good he was neither funny or scary enough. I only laughed twice and these were both at jokes regarding the differing racial attitudes of the 60s and now. As for the story, yes there are alien bad guys and the threat of the Earth’s destruction and the time travelling stuff was good but I wasn’t gripped.


Where the film is successful is with the addition of Josh Brolin. He does a fantastic Tommy Lee Jones impression, getting the voice and mannerisms down to a tee. He injects a bit of life into the story as his K is slightly (very slightly) more at ease than Jones’s incarnation. I also thought that the character called played by Michael Stuhlbarg was brilliant and I’d happily have sat through a whole film about him. Also, as I said the time travelling stuff was good and they managed to avoid either making it too complicated or full of holes. If anything it was all a bit simplified and too spelt out. Another thing I appreciated is that the film didn’t go over board in its 1960ness. It didn’t bombard you with jokes and characters and felt much more natural. 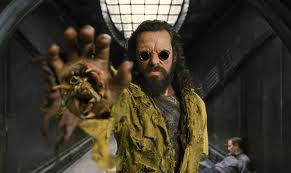 The CGI is very good although I felt that it was relied on a bit too heavily. I’ve always though that Men in Black is at its best when its human characters were on screen and sometimes it felt like they were looking for excuses to show off their CGI aliens. Another disappointment is getting to the closing credits and discovering that Smith isn’t rapping. Instead it’s someone called Pitbull with a terrible song. Another small problem is the age of the two agent Ks. For Tommy Lee Jones to be 43 years younger he would be 23. Josh Brolin does not look 23. They try to get around this by suggesting that his character is 29 and hasn't aged well but it still doesn't look right. That being said, Brolin does such a good job that it doesn't really matter, I'm just being picky!


In the end there isn’t enough in Men in Black 3 to warrant a sequel and it doesn’t come close to matching the original. The action is slow and dull and there are very few laughs but there are some good performances, especially from Brolin and Stuhlbarg and it’s nice to see J and K back again. That being said, I don’t think there is a need for Men in Black 4.