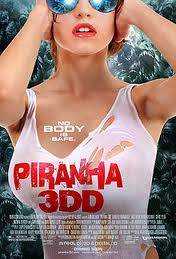 A sequel to 2010’s surprise hit Piranha 3D stars an ensemble cast of large breasted girls and handsome men plus a few D List comedy actors and well known faces in a battle of fish vs man. The action is transported to a water park in where sleazy Chet (David Koechner – Anchorman) has made some changes to his late wife’s park. These include hiring strippers as lifeguards and the use of a dodgy water supply. His daughter in law Maddy (Danielle Panabaker) is home for the summer and shocked at the changes. With rumour of Piranha on the prowl she tries to close the park but finds that she is already too late.


I really enjoyed Piranha 3D. It took me completely by surprise and was funny, rude and ridiculous. Piranha 3DD has all the same ingredients but has added more rude and ridiculous and toned down the funny. The result is pretty much the same film as the original but has lost what made it unique as it’s all been seen before. There is nothing new and the ‘story’ isn’t progressed but it has the odd moment which made me smile and plenty which made me cringe. 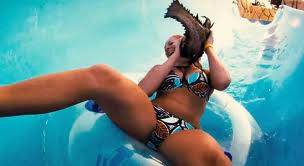 The acting is terrible beyond belief. This may be perhaps because the casting director went for looks over acting ability but in the end it doesn’t matter. In a way the bad adding adds to the fun. None of the unknowns stand out in terms of their acting but Christopher Lloyd’s cameo was good, although smaller than in the first instalment. David Koechner was as sleazy and creepy as you’d want him to be and David Hasslehoff joins the fun playing The Hoff in a turn that may make him unable to look at himself in the mirror (if he still could).


There is one scene which will probably remain in people’s minds and involves Katrina Bowden (Dale & Tucker vs Evil, American Reunion), a small piranha, a man and a knife. It’s probably the best scene and although unbelievably ridiculous and disgusting it’s quite fun. The rest of the film is forgettable and with character names such as Shelby, Chet and Clayton, you’ll find yourself willing the piranha on. 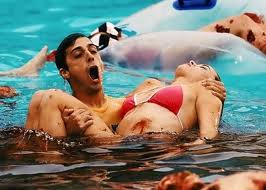 The piranhas look if anything worse than they did in the first film. The CGI was perhaps cheaper or more rushed but in the water they looked less realistic. On land (oh yes, they are on land now) they look a bit more real but this is still not a strongpoint of the franchise. The 3D was downright dreadful. The first film was one of only two films along with Hugo in which I thought the 3D added something. In this, apart from about 10 shots of piranhas swimming at the screen and bouncing chest puppies the 3D was redundant and a lot of the film looked fuzzy. I’ve always thought that this is the sort of film in which 3D could be used to great effect but it wasn’t here.


If you enjoyed Piranha 3D then you might enjoy this but to a lesser extent. If you hated the first film then you will hate this even more. It isn’t as fun as the first, manages to be both ruder and less sexy and the final action sequence isn’t even as big as the original but it’s 83 minutes of silliness that does exactly what it sets out to do.