"First of all, I don't feel comfortable talking business with a giant carrying a shotgun" 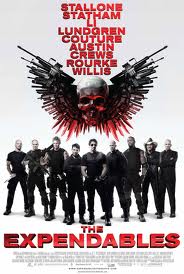 The Expendables are a group of mercenaries led by Barney Ross (Sylvester Stallone) who are sent by CIA Operative ‘Church’ (Bruce Willis) to overthrow a Latin American Dictator, General Garza (David Zayas) who is in reality a puppet of ex-CIA man James Munroe (Eric Roberts). Joining Ross on the mission is ex SAS man Lee Christmas (Jason Statham), Martial Art expert Yin Yang (Jet Li), sniper Jensen (Dolph Lundgren), weapons specialist Caesar (Terry Crews) and demolitions expert Toll Road (Randy Couture). The team may be a little long in the tooth but they still pack a punch and the fate of a country is in their hands.


I’ve been watching a lot of 80s films recently so it’s quite apt that I’ve watched this which although made in 2010, is well and truly grounded in the 1980s. Most of its stars made their names in the action movies of the period and they are joined by the action heroes of today. It’s an impressive action movie cast, a bit like a corny version of The Avengers only with fewer superpowers and more muscle. 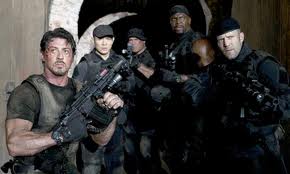 The film itself is absolutely terrible but I quite enjoyed it. I laughed out load so many times at the dialogue. Every line seemed laboured and unnatural. Stallone has an impressive action movie resume but this felt like it was written by a twelve year old fan of his. There were a couple of jokes that also made me laugh but not as many as in the films of the period that that film is recreating. Mostly I was just laughing at the ridiculousness of it. Schwarzenegger’s one scene was hilarious though I don’t think this was intended. His conversation with Stallone was reminiscent of two seven year olds at a school play. At one point Statham turns to Stallone and says “Are you crazy? You could have killed me!” To which Stallone replies “You’re welcome.” Huh? That makes no sense! And neither does much else. A constant amusement for me was the references to Jet Li’s height. It was really odd and silly and I couldn’t help but laugh even though it felt like there was an undercurrent of racial stereotyping in it. 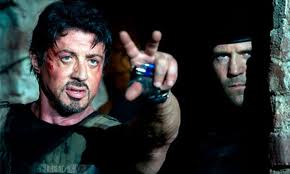 The CGI was even worse than the dialogue. It all looked cheap, shiny and unrealistic. The frequent CGI dismemberments looked comical and the blood that splattered from start to finish looked more like the topping of a cherry cheesecake, it wasn’t even red! Although the GCI was poor, the action sequences were not. They were what you’d expect from the people involved. Each actor got their fair share of shooting, punching, kicking and stabbing although Statham and Stallone as the central characters got the most scenes. The action was well choreographed and exciting although at times as ridiculous as the rest of the film and include one scene in which a giant bomb is thrown and then shot out of the air and another when Jet Li runs over to a deserted truck, does a kind of summersault past it and throws a grenade in, blowing it up. There were no bad guys anywhere near it! He’s just showing off. With regards to the acting, it was really poor. I could barely understand what half the cast were saying and when I could it was usually delivered in a macho monotone. The stand out though was Mickey Rourke who was excellent.


Towards the end of the film I was cringing at the romantic thread of the story. I was almost shouting at the screen, begging the attractive Giselle Itie (30), not to kiss the mangled face of Sylvester Stallone (65). The whole relationship felt really odd.


Stallone’s direction felt pretty unspectacular and at times, busy. This was typified in one scene in which a plane landing was shown from at least four or maybe five angles. Although this is his film, his script, direction and acting are all poor. A lot of things were wrong or made no sense. Although the movie takes place over several days, there was a full moon every night. Also in a car chase scene, Stallone changes up gear about eight times. Add that to a plot that makes little or no sense, poor acting, a terrible script and bad CGI and you have a really bad film. A bad film which I enjoyed. I don’t know why but I did enjoy this film. I think because it was so stupid and silly and didn’t take itself too seriously. This is in no way a good film but it’s one of the best bad films I’ve seen this year.