"Your stocking has just been, teleported" 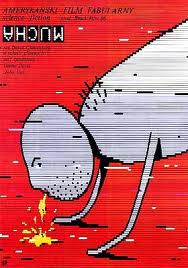 Eccentric scientist Seth Brundle (Jeff Goldblum) meets journalist Veronica Quaife (Geena Davis) at a party. Attempting to impress her he shows off his latest invention, a teleportation device. Suitably impressed she shares the idea with her editor and ex-lover Stathis Borans (John Getz) who thinks the whole thing is a windup. After convincing Veronica not to run a story as the device is not yet complete the two enter into a relationship. One night after discovering that Veronica and Stathis are ex-lovers, Brundle gets drunk and decides to step into the machine. What he doesn’t realise is that a fly is also in the teleporter and when he and the fly are teleported they are merged at a molecular-genetic level. Over the coming months Brundle transforms into a human-fly hybrid which he names ‘Brundlefly’.


The film opens with the orchestral boom of a 1950’s B-Movie in perhaps a nod to the original film upon which it is loosely based. The film retains very little of the original and is much more a metaphor for disease and the process of aging than the original. In my opinion the film owes as much a debt to Franz Kafka’s Metamorphosis as it does to the 1958 version. The film is also thematically very similar to Italian Giallo Horror, especially in its depictions of madness and alienation. 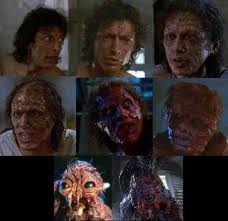 The plot unfolds at quite a slow pace for a horror. It doesn’t hit you straight away but makes you wait. As a result, the first time that something truly gruesome hit the screen I was totally shocked and physically recoiled in my seat. I’ve now been put off arm wrestling for life! The gruesome effects were fantastically macabre and repugnant. I honestly think that they were more effective than if they had been done with modern CGI. There is something more real and terrifying about 1980s hand made effects than modern computerized effects. Even though they looked ridiculous they were still shocking and hideous. An Academy Award for effects designer Chris Walas seems well deserved to me.

Jeff Goldblum gives an incredible performance. His scientist set somewhat of a pattern for his career with many of his most successful roles coming when he has played an anxious, eccentric scientist character (, Independence Day). He is edgy and almost fly like before the transformation with his eyes darting around quickly as if exploring new surroundings for the first time. His performance after the transformation is nothing short of sublime. Not only is he transformed physically due to the makeup but it is as if there is a different actor inside the suit. How and why he didn’t garner more awards recognition is beyond me. I felt that Geena Davis gave a mixed performance but Goldblum was the star of the show so it didn’t matter too much.


The Fly is a film that draws you in and relaxes you before delivering a killer blow. The disgusting effects were fantastic and came as a surprise to me. The love story remains at the centre despite all that is going on around it and is both charming but tragic. Cronenberg has created a film that feels too well made for its subject matter. In the hands of a lesser director this would have become a straight to video B-Movie but he has created a timeless horror which I will remember for a long time.