"What kind of bird are you?" 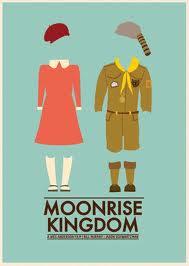 It’s 1965 and pre teen pen pals, Sam (Jared Gilman) and Suzy (Kara Heyward) agree to run away from home and meet up a year after meeting for the first time. While the two of them head off into the wilderness of Suzy’s twelve mile long home island a search party that includes Island Policeman Bruce Willis, Scout leader Edward Norton, Suzy’s parents Bill Murray and Frances McDormand and Sam’s fellow Scouts set about trying to hunt the eloping children down in the days preceding a huge storm.


I should say from the outset that I am a huge Wes Anderson fan and have absolutely loved all of his films with the exception of Fantastic Mr Fox so I went in expecting great things. My expectations were matched and even perhaps exceeded. I loved this film. sets up Suzy’s home life in a fantastic opening sequence which features some exquisite tracking shots through the family home. Before anything is said it is already obvious to the audience that Suzy is a loner who longs for something bigger, something more. Her parents do not get on and are never even seen in the same room, let alone talking to each other. She has three younger brothers who appear to get along very well. Her house is large and well furnished, indicating wealth if not happiness. All of this is established in one long sequence of beautiful camera movements which last no longer than a couple of minutes. Sam’s life with his Scout troupe is shown in a similar manner although it soon becomes apparent that he has already escaped in search of his love, Suzy. 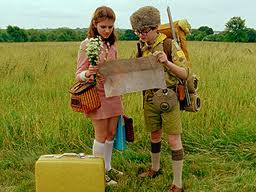 One of the things I love about all of Anderson’s films is that you could turn on the TV at pretty much any moment during any of his films and within a few moments be sure that you are watching a Wes Anderson film. His style is very distinctive and it’s all over his latest work. The shots are framed to perfection and each camera movement feels measured but not forced. There is a vague pastel and brown tint to everything which matches the film’s period setting. Everything from the sets to the characters also feels slightly off centre and as though they inhabit the same world as The Royal Tenenbaums and The Darjeeling Limited. not only creates his own world for each film but his films feel somehow connected and as though they too inhabit the same slightly odd world. 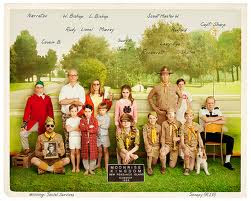 The plot is absolutely delightful and sweet. It’s such a touching and loving story which also feels like a love letter to the children’s adventure books of which Suzy reads throughout the film. Though they read these books, the children long for an adventure of their own and have finally embarked on one. The characters are equally enchanting. Sam and Suzy are somehow both old beyond their years but also very much still children. They have obvious intelligence and wisdom but convey it through a child’s eyes. They are on the cusp of adulthood but somewhere in between. The acting of and Gilman is superb and again both feel both older than they are but also very child like. They are great. The adult characters are also great without exception. Bruce Willis is a sad and lonely cop who patrols a quiet island and although he has his faults is very kind and caring. Edward Norton is an exemplary leader who also has a big heart while Bill Murray and Frances McDormand, both lawyers, talk to each other using mostly legal language and although are not really in love with each other, care a lot for their children and want the best for them. There are also small cameos from Jason Schwartzman, Harvey Keitel and Tilda Swinton, all three of which were welcome and provided something. The adult cast on the whole was fantastic.


The score goes perfectly with the on screen action and features a mixture of militaristic marching music, classical and 60s pop. They somehow all work together and help to push the story on to it’s frenetic final act.


This is a film with a big heart, lovely story and plenty of laughs. Although I only just saw it I already can’t wait to see it again. It’s everything you’d expect from a Wes Anderson film but as well as being unusual, wacky and nice to look at also has a sweet story about adolescence, growing up and first love. If you're a Wes Anderson fan then you'll love this, if you don't know who Wes Anderson is then you're in for a treat.