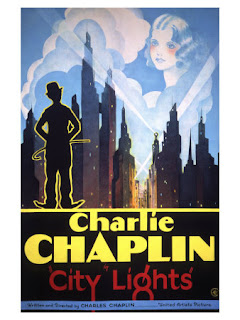 In the late 1920s film stars, directors and producers faced a dilemma. 1927’s The Jazz Singer had opened the world’s eyes and ears to the talkies; movies with sound and the revolution had taken off quickly, brushing former silent stars aside and ushering in a new era of spoken dialogue. Arguably the biggest star of the silent era was Charlie Chaplin. His films had been hugely popular in every corner of the globe, from London and Los Angeles to Leningrad and Lahore. His universality came not only from his popular and identifiable Tramp character but because people from any country could understand the language of the film. Each film’s themes and jokes worked in any language and were loved by all.

It was because of The Tramp’s universality as a silent character that caused Chaplin to shun the talkies for a decade after they first became the norm. City Lights was his first film produced after The Jazz Singer and he stuck to his guns, despite outside influence, and kept The Tramp silent. The movie’s opening scene gently mocks the new medium at a statue unveiling. The City Mayor proudly strides to a podium to dedicate a new statue and when he speaks an amusing Donald Duck type noise is emitted from his mouth. His lady wife then takes the stand with similar, higher pitched results. To me this is Chaplin’s way of proving his point to the English speaking world. We can’t understand what the characters are saying so how would his fans in France, Russia or Brazil understand him if he spoke? With this opening scene we not only have our first laugh but also a taste of an ever maturing Chaplin, a man who isn’t afraid to express his opinions on screen. 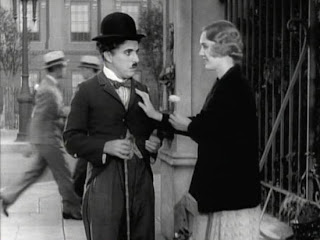 City Lights is often regarded as Chaplin’s finest film and with good reason. It’s far from his funniest but is one of his most well rounded and melodramatic movies. The romance and drama still rank amongst the best in the history of film and it is probably just about my favourite (though that choice often changes depending on my mood). The story features Chaplin as The Tramp for the penultimate time. The character would be retired in 1936’s Modern Times, Chaplin’s last silent film. The Tramp falls for a blind flower girl (Virginia Cherrill) who mistakes him for a wealthy gentleman. Unable to show his true self, The Tramp tries his best to care for his love but his lack of funds makes this difficult. One night The Tramp saves an eccentric millionaire (Harry Myers) from suicide and the two become friends. The wealth and poverty are played off against one another in a satirical manner, popular with audiences experiencing a depression, with neither the millionaire of the flower girl spotting The Tramp for who he really is.

City Lights was a famously arduous shoot and the longest of Chaplin’s career. By this stage he was becoming known for his exhaustive shoots and multiple takes with no other director shooting as much and using as little as he. A total of 179 shooting days were needed across two years to complete City Lights and there was the usual drama along the way. Leading lady Virginia Cherrill was picked for her ability to ‘play blind’ but she and her director/co-star didn’t get on. This was unusual for Chaplin who had a habit of sleeping with and or marrying his romantic leads but right until the end of their lives, the two maintained their lack of friendship. Cherrill was at one stage sacked and briefly replaced with The Gold Rush’s Georgia Hale but Chaplin eventually relented, reinstating Cherrill. Something of note which I’d never noticed in the credits before is that long time Chaplin bit part players Henry Bergman and Albert Austin acted as Assistant Directors on this film. Chaplin obviously liked having those who he could trust at his side, as well as at his beck and call.

The city of City Lights feels like a composite of various cities with areas resembling London, Los Angeles, Paris and others created in the sets. Like the lack of spoken dialogue, this may well have been an attempt to keep hold of the worldwide audience but it also works to create a city which is unlike any but alike with all. As well as filming at the Chaplin Studios and United Arstist Studios, a little location shooting was done on the streets of San Fransisco. These show the rise of California from the dusty-roaded backwater of Chaplin’s early films to the bustling metropolis it was becoming. Though lacking any spoken dialogue, the movie does feature sound effects. The aforementioned faux speech of the opening scene is a prime example of this but there is also a whistle and other brief effects dotted throughout the score. The inclusion of these sounds for comic effect goes some way to disprove that Chaplin failed to include ‘sound’ for fear that he wasn’t technically proficient enough to do so. In order to further display his polymath abilities, Chaplin composed the first of his many film scores for City Lights. For me it’s far from his best and a little obvious but my toe was tapping along throughout. 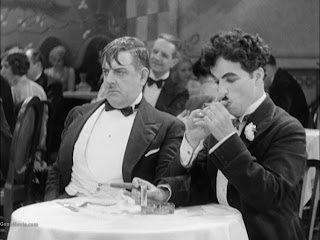 As I mentioned briefly a few hundred words ago, I don’t think City Lights is close to Chaplin at his funniest. That’s not to say that I didn’t laugh at the film because I did. Even tonight on what must be my forth or fifth viewing I still chuckled several times, as did my girlfriend who was half watching while getting ready for work. The humour is still of a slapstick nature but feels cleverly placed. By this stage in his career, Chaplin wasn’t afraid to omit a joke if it impeded the story but those which remain never fail to raise a titter. I adore his mastery of unexpected movement and use of props. A prime example of this comes in a nightclub when The Tramp attempts to light a cigar. He is confused after accidentally lighting his companion’s cigar to find that his remains unlit. The joke is then repeated to more confusion and a greater laugh. Soon after this, there is some great business with a moving chair and then some badly placed spaghetti. The use of the mundane to create humour was something for which Chaplin had no equal.

One of the comedic highlights of the movie arrives in the form of a boxing match. Chaplin had turned his gaze to boxing in 1915’s The Champion but he goes so much further with the idea here. The scene in the ring is brilliantly choreographed and wonderfully funny. It’s amongst his most iconic scenes and the sort which makes audiences faces light up on their initial viewing. The reason the scene works so well though is partly because of the one it follows. We see The Tramp make a deal with his opponent that they will go easy and share the prize money but a last minute change of opponent causes a panic in his face and leaves him searching for good luck charms. Because we are expecting him to take a beating, what happens in the ring is all the funnier. 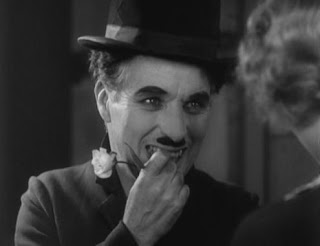 This movie rivals 1921’s The Kid for dramatic intensity and is one of Chaplin’s and cinema’s greatest love stories. The lengths that The Tramp goes to to care for the blind girl are heart rendering and what makes it all the more powerful is that he knows he can never reveal himself to her, especially once her blindness is cured. The scenes they share are beyond poignant and touching and reach previously unseen levels of acting prowess and cinematic beauty. Critics of the time said of the final scene that it contained “The greatest piece of acting in movies” and while that might no longer be the case, the scene is immeasurably beautiful and miraculously underplayed. It has to be one of the defining moments of romantic cinema and for me went unmatched until I recently discovered Linklater’s Before films. Cherrill’s acting is perfectly pitched and you feel for her without ever pitying her. She really gives the impression that she’s blind but her vision for beauty of spirit is unimpaired. Chaplin, an underrated actor, gives one of his greatest performances here. He brings levels of emotional depth which only came to the surface in a few of his movies.

City Lights remains after more than eight decades, one of the greatest romance films in cinema history. Its structure and storytelling have barely ever been matched and the comedy is strong enough to rival most other screen comedians. It has been and remains one of my all time favourites and is a film I’m always happy to thrust in the direction of others. It’s a film which proves, a lifetime from its début, that Chaplin was far from behind the times with his refusal to turn to sound but instead was in touch with his audience and showed enough vision to tap into the emotions of their children and children’s children.