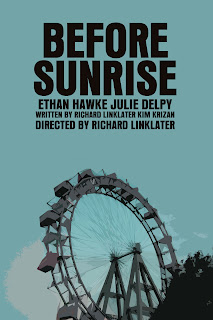 A chance meeting aboard a train from Budapest to Paris results in a wonderfully constructed whirlwind romance for two strangers. Jesse (Ethan Hawke) is travelling alone through Europe when he begins talking to the pretty French lady across the isle from him. That woman is Céline (Julie Delpy) who is on her way back to Paris after visiting her grandmother in the Hungarian capital. They strike up a friendly conversation which continues in the dining car before Jesse’s stop in Vienna approaches. Sensing a connection he suggests that Céline disembarks with him to continue their discussion. She impulsively agrees and the duo spends the night wandering Vienna together.

Before Sunrise lacks any sort of plot but is nevertheless beautifully written and structured. I never once wished for something to happen besides the continuing conversation and discovery. The dialogue is deeply woven and superbly delivered by two actors on top form. Their connection seems so real that it’s hard to believe that the actors themselves didn’t end up together. Nothing is forced and the conversations meander naturally while at all times remaining high brow and intellectually stimulating. Occasionally there is a lull in the engagement I had with the dialogue but this still works as it’s how one would react when listening to any long conversation.


The film managed to hold me attention for about ninety of its one hundred minutes which is an excellent hit rate for what is essentially a movie about two people talking. Their discussions revolve around their individual views on life and the meanings of deep philosophical questions. Over the course of the film the audience learns that Jesse is fairly cynical but open to new experiences while Céline is more of a natural romantic and open to believe things without need for explanation or understanding. Their natural compatibility comes through their shared willingness to be impulsive and to understand each other’s views and opinions. There is also an obvious physical attraction which develops and comes to the foreground as we move through the night. 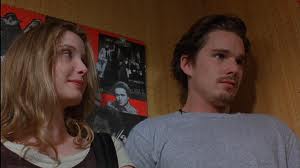 The backdrop of the movie is the beautiful Romanesque and Baroque city of Vienna. The film captures the city’s narrow, cobbled streets as well as panoramic views of the Danube and the famous Riesenrad which is the location for one of the sweeter scenes in what is already and incredibly adorable film. What I like about the film’s setting is that it isn’t obvious. Although a large and attractive city, it wouldn’t be the first choice for most filmmakers. You’d expect Paris or maybe Rome, London or even Barcelona to be on the hit-list but this is part of what makes Linklater’s film different from other romantic dramas. It doesn’t follow the normal rules, there’s no guarantee of a happy ending.

My favourite scene takes place in an old record store called Alt und Neu. Céline picks up a record and asks Jesse if he’s heard it, to which he answers that he hasn’t. The pair head to a listening booth and put the record on. It’s an old love song which just so happens to perfectly suit the situation they find themselves in. There’s no dialogue inside the booth but Linklater shoots the actors from below as they’re squeezed into the booth together. There’s an obvious tension in the air and the couple can’t bring themselves to look into each other’s eyes. As Jesse looks at Céline, she looks away and when she turns back to meet his gaze, he averts his eyes from hers. This continues for a minute or so and is a magnificently choreographed and acted scene which says so much without ever saying a word.

Towards the end of the movie I began to get a tight, uneasy feeling in my stomach. Not only was I aware that an excellent film was coming to an end but I also feared for the relationship. I was willing the couple on and even though I knew of two sequels, I still worried that their time together was at an end. Their final scene together had me as close to tears as I’d come in a long time and the smile that I’d had on my face for the previous hour and a half was gone. The scene at the station is beautifully executed and like the rest of the movie it’s rushed which makes every word that bit more prescient. I not only wanted the couple to remain together but I wanted to remain with them as a voyeur, mirroring their emotions of awkwardness, relaxation and heart fluttering. Following this scene, the camera heads back to still images of some of the locations the couple visited. The city feels empty without their presence and there’s a real sadness to these shots. 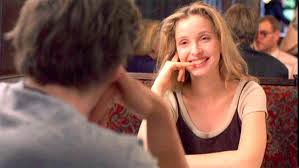 I think that the film starts at a place which forms the basis of a fantasy that many people will have had. How many times must people have glanced across a train or bus or passed someone in the street and wondered what would happen if they were to just strike up a conversation? This pair helps to fulfil that exciting fantasy of discovery and romance. It then continues passed that initial burst of flirtatious excitement through passages of awkward tension and the unearthing of information about who this person really is. In most cases you’d probably discover that you have little in common with the person but here the couple seem perfectly matched which is what makes the film work so well and makes the ending so heartbreaking yet realistic. If this film had been made by someone else, it may well have ended with Jesse moving to Paris but that’s not real life. Watching this film feels like watching something real unravel before your eyes.

Both actors are superb and look totally at ease with themselves. Ethan Hawke plays the aloof but confident American which you rarely see in real life. My experience of our louder cousins when I was in Vienna was a lot of noise and attention being drawn to themselves. He is almost the exact opposite, apologising for his lack of language skills while slowly settling into showing his real self in front of Céline. Julie Delpy is adorable and I fell in love with her a little bit myself. She plays the romantic and intellectual Frenchwoman which is ever so slightly stereotypical but from what I’ve seen of her own 2 Days films, it’s quite close to her actual type. The chemistry the two actors share is something I’ve rarely seen matched and without it the film just wouldn’t have worked. The actors along with the writing, gentle direction and delightful setting all add up to make Before Sunrise one of the greatest romances I think I’ve ever seen. Although Linklater waited nine years to make the sequel, I’m going to watch it right away.