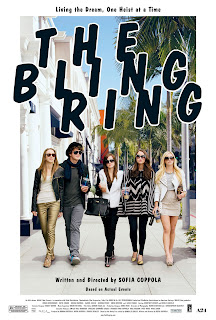 Between 2008 and 2009 a group of mostly privileged, celebrity obsessed teenagers burgled the homes of several celebrities, making off with over $3 million in jewellery, clothes, bags and other designer accessories. The group coined ‘The Bling Ring’ were the subject of a Vanity Fair article which forms the basis of this film from director Sofia Coppola. The film focuses on the acts of burglary, what the teens wanted, what they got and some of the consequences they faced when eventually discovered.

To me the premise sounded interesting. I had no prior knowledge of the robberies and hadn’t heard of the group until I began seeing trailers for the film. It looked to be a satire on obsession with fame and greed and reminded me a little of the similar but deeply flawed Spring Breakers. This film annoyed me even more than that. I should state right here that I abhor the fame hungry, greed inspired culture that some teenagers aspire to be a part of. My girlfriend occasionally (often) puts on programmes like The Hills or E! News and they make me so angry that I have to leave the room. There are few people on the planet I despise more than those who seek fame and fortune without the talent to deserve it. This film focuses on exactly those kinds of people and appears to glorify their actions.


The film fails, so far as I could tell, to ever suggest that there is something wrong with these kids. It barely scratches the surface as to why they’re doing it or what their motives might be, beyond that they want to. I hated these kids from the moment I laid eyes on them. They’re the sort of rich, sports car driving, celebrity obsessing, looking down on those without money, dicks that I can’t stand and Coppola merely presents her film as an A-Z of their burglaries. I can understand that she doesn’t want to inflect any bias but the film is described as a crime, comedy/satire. That’s just not the case. There is no satire here. The characters aren’t put under the microscope by the camera; they are instead allowed everything they wanted, the fame, the cameras and the attention. Not only did they unbelievably get that in real life but they’re getting it all over again on the big screen. 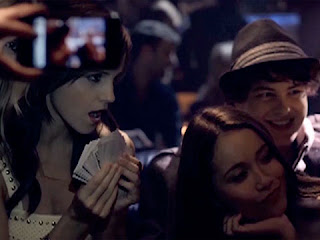 The film paints the teens as the self obsessed, money grabbing, privileged people that they are but doesn’t really do much else. Maybe the film is allowing us to make up our own minds as to how we feel but there is no grey area here. This isn’t a story about a kid stealing medicine from a pharmacy to tend to his ill father. This is a group of Audi driving, Prada wearing teens stealing from Paris Hilton. Something that I just didn’t understand, but may well be true, is that all of these ‘celebrities’ (people who have worn clothes in magazines) leave their doors unlocked! I wouldn’t leave my door unlocked for a few minutes, let alone when I’m out of town and my house contains very few Malobo Glonick shoes. Why were these people leaving their houses open? They’re idiots.

From a technical standpoint the film is well made. Coppala gets decent performances from her cast and the cinematography is fine. I hated the soundtrack but when it’s the robot music that these cretins listen to, I never expected to like it. It works with everything else that’s presented though. Some of the shooting actually took place in Paris Hilton’s house. I could not believe what I saw inside. She is perhaps more obsessed with herself than the kids are. There are pictures of herself everywhere. It’s like a self-made shrine and made me both very angry but also very sad. This is who these teenagers idolise. A woman incapable of displaying emotion, who is famous for being rich and having sex tape. I don’t understand.

My main problem with The Bling Ring, aside from my hatred of the characters and everything they stand for (has that come across?) is that it lacks social commentary. It’s a film that says ‘This happened’ rather than ‘Why did this happen?’ It turns what could have been an interesting story into a simple look at some of the most repugnant and detestable teenagers I’ve seen but goes no further. The burglaries feel repetitive and aside from some solid filmmaking, I hated every moment.