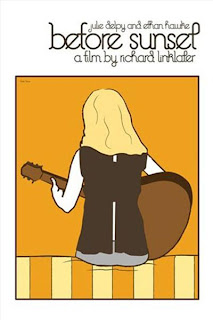 I can’t imagine having to wait nine years for Before Sunset to come around. Released nearly a decade after Before Sunrise, a film with a remarkable and original will they/won’t they conclusion, the film picks up the lives of Jesse (Ethan Hawke) and Céline (Julie Delpy) after their one night romance in Vienna in 1995. It should be noted before I go on that this review may well contain spoilers for Before Sunrise so if you haven’t seen that movie yet, beware. I saw Before Sunrise earlier today and the hour long wait between films felt like a lifetime to me, so engrossed in the character’s stories was I. I can’t believe that there are people who had to endure nine years of not knowing what happened after Céline and Jesse went their separate ways.

The film opens in a Parisian book shop where Jesse, now an author is answering questions about his latest book. Towards the end of the interview he notices Céline standing in the corner and instantly loses his train of thought. He manages to sneak away for a coffee with his former fling before a 7:30 pm deadline to catch a flight. It’s on the way to the café that we the audience have our hearts broken. The pair didn’t meet in Vienna six months after the end of the first film. They in fact haven’t seen each other since that magical night nine years ago.


As I have said, I watched both films on the same afternoon but they were made nine years apart. What’s remarkable is that watching them back to back feels like stepping out for a few moments and then continuing with the same film. The characters, writing and acting are so perfect that the gap is only noticeable due to the actor’s ageing. The characters look so at ease with each other after mere moments that you’d be forgiven for assuming that they had remained close after the first film. It’s terrific writing and acting which causes this sensation and I doubt many sequels have ever managed to pull it off after such a long break between films.

Although the characters seem to fall back into the same easy conversational flow of the previous decade, there are questions to be answered. The film makes their missed second date even sadder by announcing the circumstances surrounding their lack of contact. Even still, I was so happy to see them back together again, wandering the streets of another city. There is a greater maturity in the conversation this time as you’d expect from a couple now into their thirties. What they still display and Céline in particular, is their passion and idealism. She especially has stuck to her beliefs in the intervening years and now works for an environmental organisation, something which Jesse wholeheartedly respects and admires. Jesse has spent several years writing a novel, the plot of which is strangely familiar. 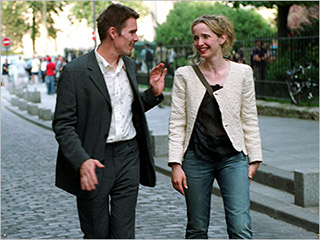 Jesse’s book is basically a slightly fictionalised account of the couple’s previous meeting and this leads to some interesting discussions about how the couple remember the night and the impact that it has on their lives. It’s obvious that both of them still remember it and each other vividly and both regret not keeping in touch. The look on Jesse’s face when he first spots Céline is one of welcome but surprised satisfaction. It’s a look that suggests both coming home and stepping out for adventure. Despite the couple’s obvious affection for one another there are barriers to their falling for each other again. Past and current relationships are discussed with initial discussions of current happiness soon falling away into more honest and frank territory.

Like the first film, this one feels rushed but not in the sense that the production was rushed, more in that you know there is a quickly approaching deadline for closure and as it hurtles towards you, you remain unsure as to the film’s outcome. We end up back at Julie’s apartment with the clock frantically ticking down. It’s here that we are treated to one of the film’s best scenes as Céline sings to Jesse who watches on in adoring amazement. It’s a beautiful song which speaks tantalisingly of their previous liaison. The film’s conclusion is just as frustrating as the ending of the first film but I didn’t feel myself as emotionally invested the second time around. The closing shot of Jesse frantically playing with an item of jewellery and final words “I know” leaves the film with two possible conclusions. It leaves the ending up to the viewer (at least until they watch the third film).

I said in my review of Before Sunrise that I was glad that film chose Vienna over the more obvious Pairs, Rome, London or Barcelona. The second film is indeed set in Paris but this is Paris, not Paris, France of traditional American films. There are mercifully no images of the Eiffel Tower and no lingering shot taken from outside of Sarcé Coeur. There is a scene set in the shadow of Notre Dame but aside from that, the production avoids the cliché that normally comes with filming in the French capital. The pair wander down interesting streets and alleyways and along a pretty looking raised garden path but they barely notice the city. Their eyes are fixed on one another and discussions of their missed opportunity as well as a long overdue catch up. 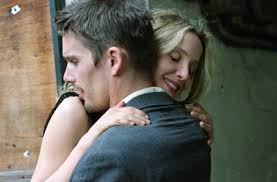 I felt that this film lacked the heat and passion as well as discovery of the first film but that’s understandable. This isn’t a story of twenty-somethings falling in love; it’s a story of thirty-somethings rediscovering lost love. Still, I missed some of the buzz I got from the first film. The conversations were just as interesting, if not more so because you have a basic knowledge of the characters by now and can sometimes pre-empt their ideas and responses in a way that you would struggle to in the earlier film. They can still surprise you though, as Céline does in a scene set in a car.

The acting is equally as special in this movie if not better. The actors slip back into characters they haven’t played for close to a decade with what looks like consumable ease. Their relaxation with the characters relaxes the audience and within a few seconds you know you’re back with some of the sweetest characters you’re likely to see on film. Delpy and Hawke also had co-writing credits on this production but to be honest the script is no better or worse than the first film because both are near perfect. I like the collaboration though and read that emails and faxes went back and forth for years between the actors and director while trying to nail the finer points of the script. Cinematographer Lee Daniel also deserves special praise for creating images which feel like they flow in real time. The film is shot as though in real time with the meeting lasting almost exactly as long as the film. Daniel must have struggled to match lighting and conditions over the duration of the shoot but it’s nearly seamless.

Before Sunset is a beautifully executed sequel to a wonderful film. It builds on solid foundations, taking the story further while leaving the audience wanting more. Its script is a strong as graphene and its characters as loveable as a teddy bear made of baby rainbows. I can’t wait to catch up with Jesse and Céline again and feel fortunate that I don’t have to wait another nine years to do so.