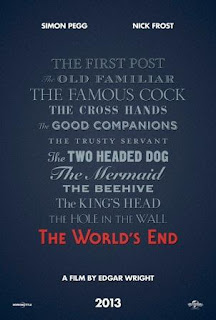 With the final instalment of ‘The Cornetto’ trilogy, writers Simon Pegg and Edgar Wright have bought us a film about what it means to move on and grow up. It’s an apt theme as the film itself is by far the most grown up and mature work the pair have produced so far. Pegg stars as Gary King, a man-child stuck in the past who brings together his childhood friends to attempt a re-enactment of a fateful night over twenty years ago when they tried but failed to complete the ‘Golden Mile’, a twelve stop pub crawl through their home town. Although the friends are unsure, they accompany Gary but what starts as a trip down memory lane, turns into something quite unexpected when it is revealed that the people of Newton Haven have been taken over by an unknown force.

I’m not a huge fan of Shaun of the Dead and Hot Fuzz, the other films in this loose trilogy but I found them both entertaining. I personally think that The World’s End is the best film of the three but probably isn’t the funniest. It’s a more measured, thought provoking film which strangely evokes parallels in the audience’s lives while providing entertaining moments along the way as well as the odd laugh. Pegg and Wright appear to have recognised that their audience has grown with their films and they suitably include themes which you wouldn’t find in their earlier work. The movie reminded me of Toy Story 3. That film included ideas about ageing and one’s place in the world after the fun and laughter of the first two films. This instalment is pitched in a similar way.


The alienation felt upon returning to one’s hometown is something I can relate to. My hometown is not too dissimilar to the fictional Newton Haven in size and it’s the sort of place which most people leave when they reach eighteen or so. Going back always feels strange. It’s an odd sensation of both change and similarity. Things stay the same but they feel different. This is captured in The World’s End and milked for the purposes of the ‘invasion’ which provides the action of the second half. The writers reference the likes of The Day the Earth Stood Still, Invasion of the Body Snatchers and other 50s sci-fi and the change in tone in pub four is well handled and unexpected, even though you’ve seen the trailers and know what’s coming. I also think that the film owes a debt to other recent British successes such as Sightseers and Attack the Block for its violence and science fiction elements. At the moment though, there appears to be a sort of Rat Pack mentality in good British cinema with members of each tribe appearing in or working on the others films. 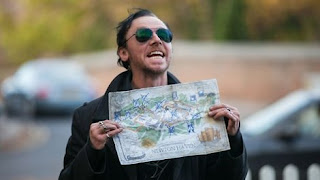 As I mentioned in my opening, I didn’t really find the film that funny. It probably didn’t help that I was in a screening with a total of three audience members but even still, it didn’t tickle me much. That being said, there are some funny moments and the script is rich and entertaining. It feels as though they decided on story first, laughs second though and I don’t think that was a bad thing. When it comes to comedy films, the funniest aren’t always the best. City Lights is my favourite Chaplin but it’s not his funniest. Whereas jokes wear thin on the second and third watch, great stories only get stronger. Sometimes I find Simon Pegg an annoying and unwelcome screen presence and that was occasionally the case in this film. His character is written that way but despite not really liking him, I did find him quite funny. He plays that loser guy who you see in pubs back home, unable to move on, still living on passed glories. American films have featured this character for decades, the ex-quarterback bully type who still lives with his parents ten years on, but I haven’t really seen it done in a British film.

The other characters are a little samey but each is well written and also well designed. The costumes look great and fit each character perfectly. Frequent Pegg collaborator Nick Frost has the largest role of the ‘Four Musketeers’ and comes out of his shell as an actor. I’m used to seeing him as the sidekick funny-man, short on brains, big on laughs. Here, like the film as a whole, he’s grown up and playing the straight-man. Playing it really well. Paddy Considine is fantastic as Steven while Martin Freeman plays, well Martin Freeman with a Bluetooth headset. He’s good but he’s playing the same character he has done for the last decade. Eddie Marsan fades into the background slightly as a nice guy. He’s not as imposing as I’ve seen him in the past. Rosamund Pike isn’t given much to do besides be the girl one. 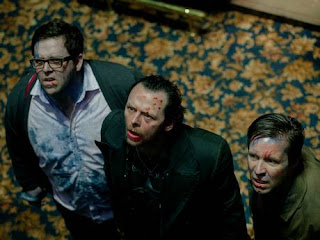 Edgar Wright’s direction is as mature as his writing and features some nice swooping camera movement and an overall assured style. The action scenes were well choreographed and the CGI was excellent but I lost focus in some of the faster paced scenes. An area where the film really excels is in its soundtrack. While the score is a little boring and expected, the soundtrack opens with a strange mashup of radio announcements and dance music before settling into a great sounding collection of early 90s Madchester stuff, the sort of music the friends would have listened to when they were in their teens. There are several knowing mentions of this music in the script too.

Despite a few moments of boredom, The World’s End is a raging success. It’s no masterpiece but the story is strong, plunging emotional depths late on, while the laughs are infrequent but arrive often enough to qualify it as a proper comedy. The sci-fi elements are strong and the reasoning for their inclusion works fine but I think the reason I liked this film above all else is that it spoke to me about how and why we move on and get stuck in the past. The writers have taken a moment in their character’s lives in which their paths diverged and bought them back to relive, rediscover and recover and it’s something that is instantly relatable.