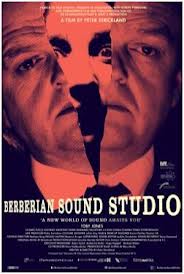 An homage to Italian giallo horror films and the mechanics of cinema itself, Berberian Sound Studio stars Toby Jones as Gilderoy, a shy Englishman who gets a job as a Foley artist on the 1970s Italian film The Equestrian Vortex, an giallo horror with typical themes of Satanism and extreme violence. Gilderoy, man more at home capturing the sounds of the English countryside, is like a fish out of water and struggles to get to grips with the Italian way of film making as well as the horrific violence on screen. Set inside a claustrophobic sound studio, the film follows Gilderoy as he slowly becomes more and more dishevelled while trying his best to create the sound to accompany the terrifying visuals, none of which are ever seen on screen.


The film reaches a critical point around seventy minutes in from where everything goes a little strange. It can be described as being without plot and its ending is confusing to say the least. The preceding hour though is amongst the best I’ve seen from a 2012 film and up until the final third it was well inside my top 10 of the year. What is good is that prior knowledge of giallo isn’t necessary in order to enjoy it. I’ve only seen one giallo film in the last year, Dario Argento’s Tenebrae, and know very little about the genre but still really liked the film. 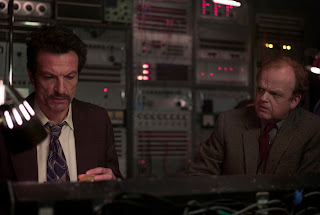 There are two great things in Berberian Sound Studio. The first is the sound and the second is Toby Jones. Jones delivers a career defining performance which is underplayed to perfection. He never overdoes it and the camera treats his face as the focal point, pulling close to him as he witnesses the horrors of the film and the unusual ways of working that show themselves around him. His face is full of little twitches and tiny looks and changes in his gaze which could be missed if not looking for them and it shows confidence in his performance that Jones didn’t play it larger in order to be noticed. He is right on the money all the way through. His appearance changes as the film progresses from buttoned up, uptight, awkward Englishman towards a more crazed and confused man who like the audience isn’t sure what is real and where things are going. The rest of the cast is strong too. Cosimo Fusco is good as Gilderoy’s boss, playing perhaps a slightly caricatured role but one that is realistically scary and powerful. Also, he is Paolo from Friends! It took me until my second watch to realise this though. Tonia Sotiropoulou (Skyfall) has a small role and is unbelievably hot. She plays a fed up secretary who has no time for Gilderoy and his Englishness and is very good. Susanna Cappellaro is also excellent and helps to add to the craziness of the latter stages. 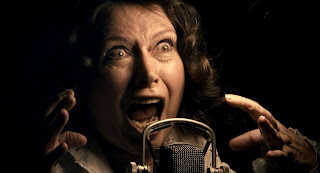 What I liked most about the movie is that the audience is able to see behind the camera and into the inner workings of film production. We see film as it was in a pre digital age and it feels more loved and a time of experts and artists. I’m sure that modern sound engineers are very skilled but there is something about seeing someone plugging wires into huge boxes and twisting dials on large mixing desks while a tape spins behind him that just looks and feels great. I also enjoyed seeing the art of Foley up close. Various vegetables double for broken and battered body parts and in one excruciating scene, a hot saucepan squirted with water doubles for a woman’s vagina being prodded with a red hot poker. As I said, you never see these things but their description and sound effects are no less terrifying than if they had been seen, if not more so. I often find in horror that it’s what you don’t see that is scarier. The sound effects overall are incredible and the sound added to Berberian Sound Studio gives it an eerie, claustrophobic and haunting quality.


Although low on plot the film doesn’t outstay its welcome and I’d have been happy to carry on watching. One problem I had is that it often asks more questions than it answers and I really want an explanation for the ending. I haven’t looked far but have been unable to come up with a satisfying clarification for the final third. It may be a dream, madness or even purgatory. Either way I’d liked to have had it explained but understand the reasons why it wasn’t. The final act is also where any prior knowledge of giallo comes in handy too.


Even without a wholly satisfying conclusion Berberian Sound Studio is an expertly made film which is beautiful to look at and horrifying to listen to. Toby Jones is brilliant and even having seen it twice in the last twenty-four hours I’d be happy to watch it again soon. I’m sure I’d get more from it and Jones’ performance on a third, forth and fifth viewing.