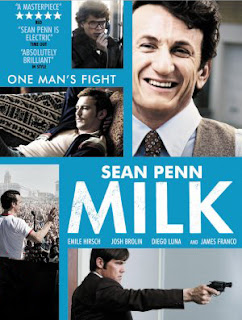 Milk is an Oscar winning political biography of Harvey Milk, the first openly gay elected official in American history. The story begins in New York City in 1970 when the soon to be forty year old Harvey Milk (Sean Penn) meets a younger man Scott Smith (James Franco) on the subway. The two become lovers and with Milk wanting to make something of his life the two men move to San Francisco where they eventually open a camera shop in the Castro neighbourhood which is slowly becoming more and more homosexual friendly. Over the years Milk begins campaigning for equal rights for homosexuals before running for office multiple times. Milk tells the story of his struggle for office, recognition and respect from his fortieth birthday to untimely death eight years later.

Milk has for a few years been one of those films which I wanted to see, but just hadn’t got around to. It turned out to be pretty much the film I expected it to. It made me angry, I was interested and engaged and occasionally enraged. Sean Penn’s performance was excellent too and I’m not surprised that it along with the subject matter won him an Oscar. For me the film accomplished exactly what it set out to. It educated me.


My knowledge of the story and of Harvey Milk before seeing the film extended to as much as I knew he was the first openly elected gay official in the states and that he was later assassinated. The film helped to fill in the blanks as well as give me a greater understanding of the period and issues surrounding the plot. The opening scenes of newsreel footage showing gay men being arrested in the 1950s and 60s is outrageous enough but it feels as though attitudes had changed little in the decades following and I’ve even had experiences where I’ve had to defend gay people from people who think it’s wrong or a choice or whatever reason they have for their ridiculous prejudice. Milk also made me dislike religion even more than I already did as a lot of the homophobic sentiment delivered in the movie comes from people stood behind the bible, a book written mostly by people in the Bronze Age which for some reason close minded people believe should rule the morality of today. By the bible’s teachings I should be stoned to death for writing this on a Sunday incidentally. 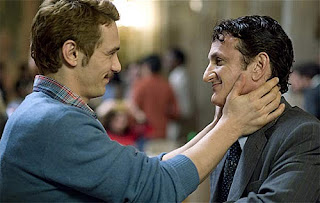 I found the inner workings of Milk’s political team interesting and his home life is touched upon throughout. It is made clear that juggling his personal and public life was very difficult and both James Franco and later Diego Luna convey their dissatisfaction well. The film nearly intersperses real news footage and political speeches from the period into the narrative which helps to route it firmly in its place. The design and costumes are also very good at supporting the idea that what we are seeing is an accurate reconstruction of 1970s San Francisco. I thought that overall the acting was very good. Penn obviously stands out front and centre but I also thought that Josh Brolin was excellent. He has a malice which bubbles close to the surface and although initially I had no idea where his arc was taking him, it soon became clear what his role in the film was. James Franco is his usual laid back but tortured self and is also good.

If I have any complaints it is that I wanted more. More detail, more background, more information. I could probably get this elsewhere though including from the Oscar winning documentary The Times of Harvey Milk. In a way it is to the film’s credit that I want more. Milk is a deeply layered lesson in civil rights and history which engaged me from start to finish. The atmosphere and sense of battle and hopefulness is evident and although it brushes aside some details I thought it was a politically astute and tight biography of an interesting man living through a fascinating era.