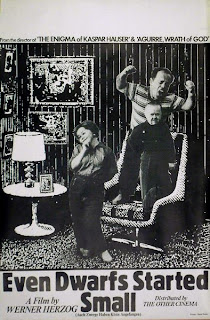 The second feature film from acclaimed art-house Director Werner Herzog, 1970’s Even Dwarfs Started Small is an extremely weird metaphor for Western Society set in a world in which everyone is a dwarf. On a remote Mediterranean Island sits an asylum in which the inmates have taken control. With their leader held hostage by the Director inside the building, the inmates cause havoc outside, gleefully smashing windows, killing animals, burning plants, teasing the two blind inmates and abandoning a van which drives around and around in circles.

I’m a big fan of Herzog’s but haven’t enjoyed all of his films. Even Dwarfs Started Small is an example of a film that I did enjoy but I’m not totally sure why. My mouth was agape as the strange actions unfolded and it makes for compelling viewing. The fact that every actor is a dwarf helps to add to the strangeness but even had the actors been of average height, this film would still rank as one of the craziest and unusual films I’ve seen.


Herzog creates a world which acts as a microcosm for our own. His theory is that the inmates have been given the key to the asylum and the ninety minute film is Herzog’s version of what he sees on a larger scale throughout the world as well as what is inside all of us. Violence, needless teasing and killing as well as sexual frustration are all themes which are explored here. The van being driven around and around in circles also seems to be a very apt metaphor for Herzog’s view of society. The Director gets all of this across while creating an engaging and fascinating film. There isn’t really much of a plot or arc to the story and instead the grounds of the institution simply become more and more unruly from beginnings in which the cast bang on doors to the end in which windows are smashed, debris is strewn about the ground, animals lay dead and a monkey is crucified. Law and order spirals ever downward until there is little left to destroy. 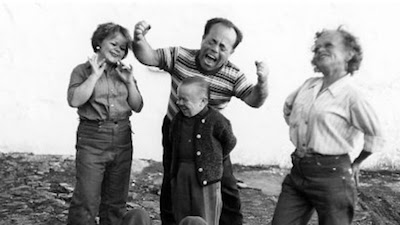 The actors are generally impressive. Although they often act as one cruel mass, each has his or her own personality. One of them acts as a de-faco leader, there is one who takes a step back and chooses to watch rather than get involved and others have their place on a sliding scale of authority and destructiveness. Herzog gets some unusual performances from his actors and in one instance told an actor that he must under no circumstances laugh and then pulled funny faces at him off camera. The result is a realistic and crazy performance. Later the same actor has genuine fear on his face when windows start smashing all around him. On set one of the actors was hurt twice; first run over by the circling van and later set on fire. Herzog promised that if no one else was injured for the remainder of the shoot that he would jump into a cactus. He famously kept his word and once the shoot had wrapped, jumped into a cactus patch leaving spikes imbedded in his skin for years.

Even Dwarfs Started Small is an interesting film which shows Herzog’s attitudes to what is inside all of us and what can happen when or instincts are left to come out. Occasionally it sags and is a little confusing at the beginning but once you get into it, it is a fascinating depiction of society featuring some great performances and nice direction. I have a problem with the way animals are treated and are unsure whether it was clever filming or real cruelty. It won’t be for everybody but if you don’t mind something on the existential side then it is a must watch.