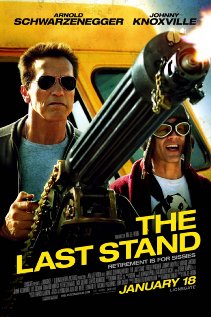 Arnold Schwarzenegger always promised that he’d be back and ten years since his last leading role he is, in Kim Ji-woon’s Action movie The Last Stand. For Arnie in front of the screen, little has changed. He may have lost some bulk in certain areas and gained some in others but his strengths and weaknesses remain constant. He remains a compelling screen presence and can still kick ass with the best of them but his acting hasn’t improved. I had no intention of seeing The Last Stand until I found to my surprise that its Director was one of my favourites, Kim Ji-woon, the highly accomplished Korean Director of the Asian-Western The Good, the Bad and the Weird and the grisly I Saw the Devil amongst many others. So, I got up at 8:30am on a Saturday and with my girlfriend away for the weekend, braved the snow and took a bus to our local multiplex. It’s safe to say that Schwarzenegger isn’t the box office draw he once was and there were 329 empty seats in the auditorium. How do I know that? Because I counted them during a first half which is full of needless exposition, crummy dialogue and weak characterisation. Things liven up in the second half but I’d been better off staying in bed.


Arnie plays an ex-LA Detective who has opted for a quiet end to his service as the Sherriff of a small Arizona town, close to the Mexican border. As he and his staff of one dimensional, stereotypical small town Deputies patrol the street with little to do but rescue cats from trees, to the north in Las Vegas a highly trained FBI force loses a cartel leader on the way to his execution. Having evaded all attempts to stop him there is only one thing in his way, a sixty-five year old former body builder/state Governor who has a town to protect. FBI man (Forrest Whittaker) helps to deliver exposition from his high tech base in Vegas while Arnie has only a few shotguns and pistols to defend against an oncoming armada of tattooed and angry drug runners and hired assassins. This being America though, the local nutcase also owns and operates the town’s gun museum and has access to all sorts of blood splattering weapons which will, with luck and a steady aim, stop the bad guys in their tracks. 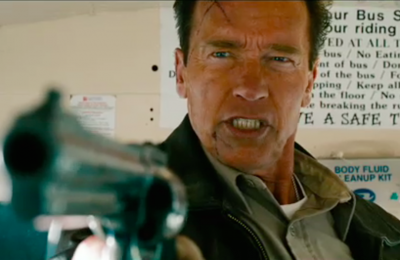 I was expecting more from The Last Stand and not so much story wise which was as you’d expect from this kind of movie, fairly predictable. I was expecting more from the Director whose films in the past have wowed me, shocked me and entertained me. This did none of that. Kim Ji-woon is known to Korean movie fans as a smart and accomplished Director whose stylish flourishes occasionally match that of Park Chan-wook for beauty and visual enjoyment. In A Tale of Two Sisters Kim tamed the psychological-horror genre and produced a beautiful and well acted film. Later with The Good, the Bad and the Weird he produced a beautiful and well choreographed Western on which he stamped his cinematic mark and then in I Saw the Devil he created a spine-chilling and tense thriller which like the aforementioned movies was first and foremost beautiful and gripping. There is little beauty in The Last Stand. There are very occasional flourishes of style such as looking down the barrel of a gun or a nice sequence in a corn field but for the most part the Direction was bland and not noticeably different from any other action movie. The only real difference is a slightly slower pace and a more measured approach to the edit but overall I was disappointed. 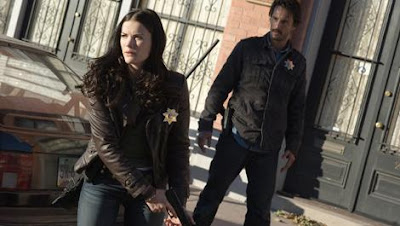 A lot of the problems stem from the plot. For a start, Forrest Whittaker walks in to a room and gives his FBI Swat guys 45 seconds notice that they are about to transport a highly prized criminal. He then says they need to keep a low profile as their convoy of ten or so blacked out cars stops for no reason in the middle of the street. This gives the crooks the chance for a getaway which is quite well done. With the Prisoner (Eduardo Noriega) on the run he happens to capture and kidnap the only woman on the force, who also just happens to be really attractive. To add further implausibility, the Cartel boss is also a part time professional racing driver which allows him to drive at high speed in his stolen supercar towards the border. There is virtually nothing in the above paragraph which is remotely plausible or realistic. Back in Arnieville, AZ, there is a steam of awful in jokes and references to Schwarzenegger such as someone saying “Have you been working out?” and references to how he could never work undercover. These are mostly tortured and left me shaking my head with disappointment. It also bothered me that the local crazy person ran a gun museum and that each of the Cops had just one facet to their personality; I want action, I need redemption, Is he the guy for me, I’m too scared for this. That was it. Following an initial fire fight, despite a lot of spilled blood and wounds, it was only the hot female cop (Jaimie Alexander) who needed to change out of her unflattering uniform and into something tighter. This further cheapened her role.

Once the action is notched up a gear in the town (which bares a remarkable resemblance to the one in Thor) the film gets a little better. There are a lot of military style tactics used by both sides and this helped to add a little realism although it also gave the action the feel of a video game. I could easily imagine it being incorporated into a Call of Duty style came. There is a little violence and gore and blood is spilled but compared to both the star and Director’s previous work, it is tame in comparison. The final one on one is inevitable and unfortunately takes place in what appears to a be computer generated environment which is a shame as the rest of the movie had a more tangible feel to it. The end is never in doubt and the actors generally acquaint themselves with what they have been given. It is Schwarzenegger and Whittaker who come off worst although Arnie delivers his charisma and brute force which is all that can be expected given his acting problems. Noriega is quite good as the charming Cartel boss but his character never feels like a Cartel boss. Johnny Knoxville adds some light relief and Jaimie Alexander is very good despite playing the eye candy. There is also a welcome appearance from Harry Dean Stanton (Paris, Texas, Cool Hand Luke) who is the best actor in the whole film despite only being on screen for half a minute.

Overall The Last Stand is a disappointment. It delivers the action, car chases and shooting that you’d expect and it’s nice to see Schwarzenegger back but he has too much dialogue and it sounds even chunkier than it is coming from his mouth. I honestly expected more from the Director and I’m glad that he is heading back to Korea for his next film. Without prior knowledge of the Director’s work it may be more enjoyable and the action scenes are fine but if you want something more than a run of the mill shoot-um-up then look elsewhere.