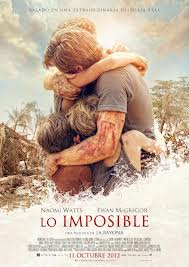 Man, I wish I was a heart string salesman. Sales will be going through the roof after the two hours of tugging and eventual breaking of heart strings due to the release of The Impossible. A Spanish production and based on a real life Spanish family’s experiences, The Impossible stars Naomi Watts and Ewan McGregor as the husband and wife of a family caught up in the Boxing Day Tsunami that struck South East Asia in 2004. While on holiday the Tsunami hits the Thai beach resort that the family are staying at, separating Wife Maria (Watts) and eldest son Lucas (Tom Holland) from Husband Henry (McGregor) and youngest sons Thomas and Simon (Samuel Joslin and Oaklee Pendergast). With Maria seriously injured and little help at hand, the family struggle to survive in the most unimaginable conditions.

I have mixed feelings about The Impossible. On the one hand it is an expertly made film which brings a terrible tragedy to the big screen but on the other hand that tragedy is still fresh in the memory and the lengths to which the movie tugs at the audience’s emotions feel cheap and unnecessary. Although I’m sure it will be well received by critics, I have my reservations and my girlfriend downright disliked it. 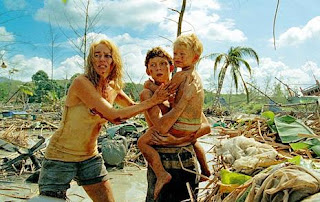 We don’t get to know the family very well before the Tsunami arrives which I found surprising at first but what we get instead is that we get to know them when they are at their worst physically and mentally following the disaster. I came to enjoy the company of the family members which may sound odd given the circumstances. The characters were well fleshed out and felt realistic. All five central cast members are superb but I think most attention will go to Naomi Watts and newcomer Tom Holland who is here in his first on screen film role. Even though those two stand out, Ewan McGreggor is excellent and Joslin and Pendergast are extraordinary given their lack of years. There is also a brief cameo from Geraldine Chaplin and I'm always happy to see a Chaplin in a film whether it's her genius father or my future wife/her daughter Oona.

The film’s central set piece is obviously the Tsunami and I think it was handled quite well. It was both tense and scary and it and the entire film felt more realistic than Clint Eastwood’s messy interpretation in Hereafter. This film actually features locals, something almost entirely missing from Eastwood’s version. The Tsunami’s power and destruction is evident and the cinematography is excellent. It felt as though we were being swept away for miles along with Maria and Lucas and the second wave was even scarier than the first. Once things calm down slightly in soon becomes evident that one of the central characters is quite badly hurt. There are frequent glances at a severe wound which I found quite nauseating and caused gasps and shrieks from my fellow audience members. There were obviously plenty of other scenes and shots which were difficult to watch too. 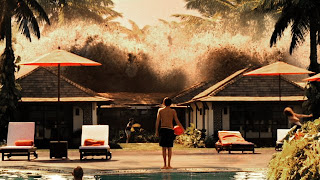 Despite the fine acting and technical accomplishments I feel ill at ease with the subject matter. It’s not necessarily I case of ‘too soon’ but more that the film constantly tugs at the viewer’s emotions when it is more than obvious that we are seeing a terrible thing. You are also acutely aware that although not a Hollywood movie, the film is a large scale production on wide release so it’s unlikely we will fall short of a ‘Hollywood ending’. There are far too many feel good moments for a film which documents a disaster which killed a quarter of a million people. I also felt as though the film felt more as though it was about a ruined holiday than a huge natural disaster at times although occasionally other characters and stories made brief appearances. Another problem is that although not totally ignoring the plight of locals, the film focuses far too much on the problems of Europeans as though they are more important, often ignoring the fact that the survivors are walking through villages completely destroyed, its inhabitants washed away.

Overall The Impossible is a mixed bag. There are some wonderful performances and masterful direction but there are too many clichés and coincidences, especially towards the end. The film will appeal to a mass audience and will cause tears to roll down cheeks but those tears will be for a middle class white family triumphing in the midst of 230,000 dead people.