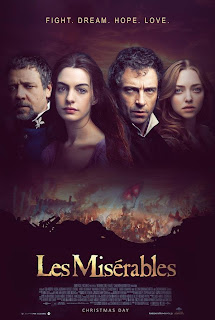 Based on the musical of the same name which itself was based on a French novel, Les Misérables is a musical film Directed by Academy Award winning Director Tom Hooper. A large ensemble cast star in a tale set over several decades during a period of multiple French Revolutions. Jean Valjean (Hugh Jackman) is released from prison twenty years after stealing some bread. Placed on parole for the rest of his life he eventually skips it and starts anew. Over the years he is mercilessly chased by Prison Guard turned Police officer Javert (Russell Crowe). Set against the backdrop of social inequity and extreme poverty the plot intertwines a love story featuring idealistic reformist Marius (Eddie Redmayne) and the illegitimate daughter of Prostitute Fantine (Anne Hathaway), Cosette (Amanda Seyfried).

The mass excitement at the release of Les Misérables caused a huge traffic jam outside my local cinema today on what is by far the busiest day I’ve seen in my four years using it. The film has just been nominated for eight Oscars and nine Baftas and in my opinion is in no way a perfect movie but deserves its plaudits. The film has an intense beginning and a slight lull in the middle before ending on a huge and powerful high which caused tears from many and in a first for me, the audience burst into applause. That is something which rarely if ever happens in a UK Cinema. 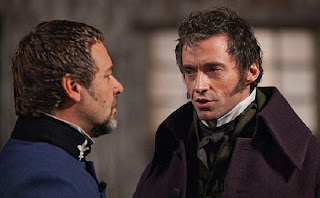 The film begins on a large set piece during which several hundred prisoners are raising a huge galleon into a dock. Amongst these is Jean Valjean (the best named character in history) who is given his freedom soon after. Valjean goes through a period of crime in order to support himself but is soon redeemed with the help of the Church. Les Mis weaves several stories over several decades with characters coming of age and discovering things about themselves and others previously unknown to them. The story is timeless but placed within a very specific time period. The social struggles of the masses makes for a fascinating backdrop and provides the oomph for some of the best songs.

Hooper, for the first time since the 1930s recorded the cast’s singing live using hidden earpieces with piano backing for reference before adding the orchestration in post production. I think this is obvious but works well. The result is that the vocals aren’t as polished as in most other musicals but I personally preferred the raw and realistic sound. The actors also resemble stage performers when they sing, some of them having to scrunch up their faces in order to hit the notes. I’m a fan of this style. As far as the singing goes the songs are obviously classics of the genre and well known to most. My first experience of them was when I saw the musical in the West End a few years ago. I loved it. Most of the singing is excellent. The standouts for me are Anne Hathaway, Eddie Redmayne and Samantha Barks. Those three are superb and Hathaway’s I Dreamed a Dream was one of the highlights. The rest of the cast were generally good too. Jackman sounds great and Seyfried is good but I wasn’t a fan of her high pitched voice. The one major problem is Russell Crowe who has a good voice but doesn’t match the rest of the cast in range or style. He often sounds as though he should be in an 80s rock band. I was always unsure of Helena Bonham Carter and Sacha Baron Cohen’s place in the film. Les Mis is a story which needs the comic relief and some scenes were amusing but I felt that they cropped up too often and were sometimes misplaced in the action. 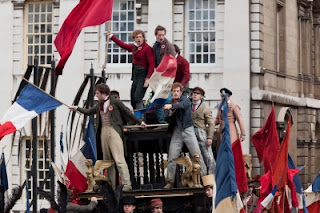 The Direction is a little bit fussy at times but overall fine. I think it’s clever how Hooper was able to change camera angles when the cast were singing as they were singing live. The audio continuity is excellent. Some of the sets feel a bit off but again on the whole they’re good. Greenwich substitutes for some of the more opulent Parisian buildings and the barricade in the poorer area of the city is well designed. Some of the interiors were a bit cramp and bare but I suppose they match the standards of the time. There is quite heavy use of CGI in some scenes which is obvious and sometimes detracts from the tangible visuals but they are probably necessary given the scope of some of the scenes.

The final ninety seconds of Les Misérables are amongst the most moving I’ve seen in a long time and helped to leave me with an impression that I’d enjoyed the film more than I perhaps had. The earlier scene in which Hathaway sings was by far the highlight for me but the ending is second to it. When the film ended I looked to my right to see my girlfriend’s mascara running down her face and others were crying too. What surprised me most was the spontaneous applause. Looking around at the suits and grey haired patrons it was obvious that this was more of a theatre audience but I’ve never witnessed a cinema audience applaud at the end of a film before. Les Mis hits some pretty high highs with some great acting and singing while the story is excellent too. It would have been pretty difficult to mess the film up given the source material and acting talent but I felt if there was one area in which the film was let down then it was in the Direction. Otherwise it is a massively enjoyable albeit long musical which will go down as one of the best the genre has produced in this young century.