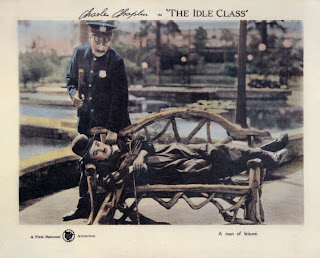 Arriving on the back of his first great film The Kid, Charlie Chaplin’s The Idle Class feels weak and thin in comparison. The writer in Chaplin was struggling for ideas before he got the spark for The Kid and it almost feels as though he is back to square one while writing the two reel The Idle Class. A Tramp (Chaplin) gets off a train, and not how you’d expect him to, before heading for a day at the golf course. Meanwhile a wealthy wife (Edna Purviance) also disembarks expecting her well to do husband (also Chaplin) to meet her at the station but he is drunk at home. Following some hi jinks at the golf course there is a case of mistaken identity at a ball at which Edna takes the Tramp for her husband.


For me The Idle Class lacks the depth which made The Kid great and also lacks the direction and laughs that are found in the likes of A Dog's Life or Shoulder Arms. It occasionally takes a more dramatic route but this often fails to match even Sunnyside for dramatic narrative. The film is saved by a middle act on the golf course which is brilliantly inventive and funny but is unfortunately bookended by a beginning and end which did little for me.

The film opens with a shot of a train speeding towards the camera which appears to be almost the exact same shot that Buster Keaton used in his classic The Goat a few months earlier. From there we see Chaplin disembark the train in his usual Tramp guise and attempt to get onto the back of a car for a ride to the course. Unusually for a Chaplin film I didn’t laugh until over four minutes in. I thought this may have been just because he was building anticipation or creating the story but it turned into a sign of things to come. The film is not without its moments though. There is a very funny scene in which the well to do Chaplin has lost his trousers and uses a cleverly placed set of prop curtains to hide his embarrassment before a newspaper and bended legs help him escape people’s glare. There is a brilliant gag later which features a cocktail shaker. I actually rewound this one and replayed it to my girlfriend who was busy in the kitchen because I thought it was so great. Most of the laughs though come on the golf course. You can almost see Chaplin’s mind working when he is out on the course with the single idea ‘The Tramp on a golf course.’ There are some very humorous slapstick moments involving lost balls, sleeping men, fights and general confusion and this sequence is the highlight of the film for me. 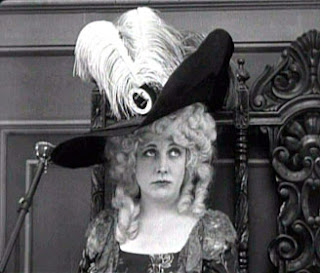 The main theme of the short is mistaken identity. This extends even to whose golf ball is whose on the course but also returns when the Tramp is confused for a pickpocket (a common occurrence in Chaplin’s work) and finally when he mistakenly turns up at a costume ball only to be thought the husband of Edna Purviance. The sequence is shamefully low on laughs and appears to be written in a more dramatic way but it fails to deliver. Chaplin produces a clever trick to avoid having both versions of himself on screen at once but then towards the end does indeed show both faces. I couldn’t work out whether a lookalike or double exposure was used but either way it is very impressive. One thing that was of interest to me is that Chaplin chose to play both roles in the first place. In an era where ‘The Charlie Chaplin’ was the most popular choice at fancy dress parties, he would have had no trouble finding a suitable double for the upper class role but chose to play it himself. Perhaps this is an example of his hands on, perfectionist personality.Another interesting fact is that Chaplin's future wife Lita Grey features in a cameo as a party guest. This shows that although 13 years old, she was still hanging around the Chaplin Studios following her turn in The Kid. (For my brief thoughts on that relationship see my review of that film).


In the end The Idle Class comes as a let down after his first feature and first truly great film and it would be another two years before Chaplin made another feature. The film is not without its moments and has a strong central act but overall it feels rushed, messy and disjointed.