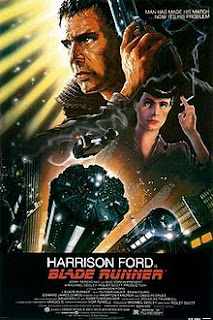 Ridley Scott’s Blade Runner has appeared on All Time lists in Empire, Total Film, Sight and Sound, Time Magazine and countless others, both professional and amateur. It is generally regarded as one of the greatest Science Fiction movies of all time but here’s where I’m going to start making people angry. I don’t think it is. I’ve seen the film twice now and on my first viewing thought it not only wasn’t the greatest Sci-Fi ever but was just average. Yesterday on my second viewing I enjoyed it more than my first but I’m yet to join the millions who rank it as one of the best films ever. For me it is too slow and not very interesting. There’s obviously a lot to like but best ever? Nope.

It’s Los Angeles 2019 and humanoid replicants have been outlawed on Earth. The machines were designed as slave labour to perform menial tasks on the off world colonies but following an uprising, Blade Runners were hired to track down and ‘retire’ (kill) all Earth dwelling replicants. Rick Deckard (Harrison Ford) is a former Blade Runner who is convinced to return to the job to track down several Nexus 6 replicants who have returned to Earth illegally, intent on extending their built in four year lifespan.


I’ll start with what I like so readers won’t instantly hunt me down and try to ‘retire’ me. Blade Runner is an impeccably designed film which creates an almost alien dystopian version of L.A. that is almost entirely unrecognisable from today. Its look and design has become iconic and instantly identifiable and has influenced several high profile Science Fiction films and TV shows. Both the original Total Recall and the recent remake had shades of Blade Runner about their design and Red Dwarf always took artistic licence from the film and even used it as the bases for its Back to Earth episodes. The Los Angeles of Blade Runner is always dark and wet and feels oppressive. The oppressive nature of the world isn’t always obvious but rather creeps in slowly. The police always seem to be overhead in their Spinners and there is a constant threat of either replicants or being mistaken for one. You always get the feeling that life is cheap. Blade Runner also successfully hypothesises a future of Chinese dominance despite being produced thirty years ago. The film also has a slight 1950s look about it, complete with Neon lights and 50s looking cars. A Noir theme runs through the piece. 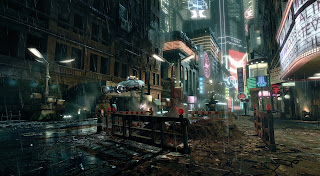 The basis for the plot is interesting and on the surface reads as a simple cop and robbers type of story but there is a lot more depth to it. There are many themes and theories about the film but one that stood out for me was the fear of death. This is something which most of us surely have and is personified in the replicants desire to extend their own lives using any means necessary. A similar theme is that of decay. Not only are the replicants decaying in front of our eyes but so is the Earth itself. There are adverts for the off world colonies in which it seems life is better and it seems as though anyone who is able to is leaving the Earth. This idea also parallels the mass migration from Europe to the ‘New World’ in the late 19th and early 20th centuries in search of a better future. Another obvious theme is religion and meeting ones maker or God. This is explored through the character of Dr. Eldon Tyrell who created the replicants and is for all intents and purposes their God.

I enjoyed the film’s soundtrack which fit the visuals perfectly. Vangelis always seems to create scores which give the film something else or something unique. It reminded me a little of Queen’s Flash Gordon soundtrack but it is other worldly and dark, using synthesisers to give a Noir like feel. The Noir style goes further than just the score though and for me the film can be classed as a Sci-Fi-Noir. The cinematography and plot are also Noiresque. 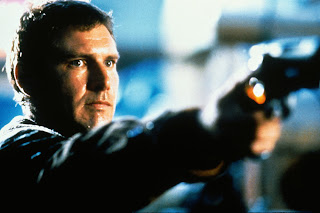 Now for the bad. As I’ve mentioned already I found the pacing far too slow. I have no problem with a film that takes its time but Blade Runner really seems to drag. My girlfriend was unable to keep attentive and eventually gave up and started playing with her phone. This wasn’t before she said to me “I thought this had Wesley Snipes in it” though, swiftly followed by “Is that Daniel Day Lewis” as Edward James Olmos’ Gaff appeared on screen. Another problem I have is the constant flashing lights which permeate the inside sets from the outside. I found these incredibly off putting and like trying to watch the film through a strobe light. The plot, though interesting to begin with soon began to bore me and I wasn’t really that bothered about who was a replicant or not. I’d have liked the idea of Deckard’s ambiguity to have been explored in greater detail but can appreciate why it wasn’t. I also wondered about the replicant eyes. It seemed to me that all replicants had glowing orange eyes. Were the other characters aware of this or is that just for the audience? It confused me and wasn’t ever explained. My main issue with Blade Runner is that if it is such a perfect film then why has the Director gone back to tinker with it so many times? I can see the merit in a Director’s cut but there are seven versions of the film. Seven! J. Murphy asked me on Twitter which version I watched but wasn’t able to tell him. Does any film really need seven versions? If it was so good then why not leave it as it was?

Overall I did enjoy Blade Runner more on my second viewing and I wouldn’t be averse to watching it again with the hope that it grows on me even more. It contains some interesting ideas inside an ambitiously designed and unique world but I’m just not able to get on board with the story which I find a little dull and predictable. It is a good film but is overrated in my humble and very sorry view.